St. Anthony of Padua and the value of shipwrecks 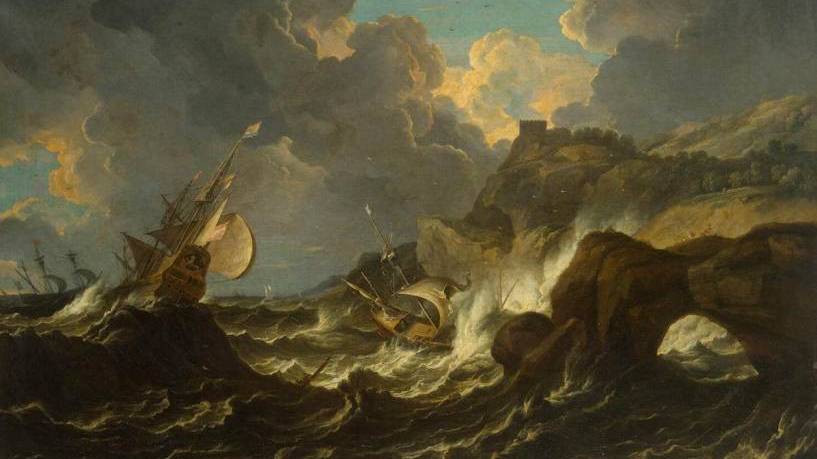 Storm in the Sea by Pieter Mulier, Hermitage Museum/Source: Wikimedia Commons
St. Anthony of Padua is one of the most popular saints in the Catholic Church. Widely invoked as the patron saint of lost things, he has been loved and revered since his own time, both for his sympathy for the poor and his erudition and skill as a preacher. But more than his great works of charity and learning, and more than the astounding miracles attributed to him, there is one small period of Anthony’s life that I find most intriguing, a period characterized by sickness, shipwreck, and silence. Before Padua and before any sermons or miracles, Anthony’s great holiness could be seen in North Africa and Sicily where, to earthly eyes, he accomplished nothing. From Portugal to Italy: drawing straight with crooked lines Early in the history of the Franciscan order, five members of that community left the shores of Europe to preach the Gospel in the Kingdom of Morocco. In January of 1220, shortly after their arrival, they were imprisoned and beheaded, and then the remains of these Franciscan Protomartyrs returned to Portugal, where they had a profound effect on a young man named Fernando Martins de Bulhoes, an Augustinian canon and a quiet scholar of Scripture. Filled with a great longing for martyrdom, Fernando joined the Franciscans, taking at the same time their habit and the name of Anthony. Before the year was out, he had set sail for Morocco with the intention of preaching the Gospel in that land and of offering his life in witness to the Christian faith, if necessary. But God had different plans. Arriving among the Muslims in December, Anthony was afflicted with a severe illness which lasted all winter so that, in the spring, he was sent home to Portugal. On the way, however, not unlike St. Paul, his ship was blown off course and finally wrecked on the coast of Sicily. The young friar continued to recover, and hearing of a general meeting of the Franciscan Order called for the end of May 1221, he travelled to Assisi, where he met the great founder of their order himself. Still, his ability as a thinker and a preacher remained hidden until one famous day in Forli in 1222. At an ordination of Dominicans and Franciscans, Anthony was suddenly asked to give a short sermon. Submitting out of obedience and composing his sermon on the spot, this humble friar amazed everyone present with his profound learning and his great eloquence, not least of all his brother Franciscans, who had only seen him until now performing the most menial of tasks! Thereupon followed nine years of teaching and preaching as he travelled throughout northern Italy and the southern regions of France. His sanctity was so widely acknowledged that the children shouted it in the streets of Padua as soon as his death was known, and he was canonized a mere eleven months later. And when his body was exhumed in 1263, his tongue was found to have remained intact and is still venerated to this day. Humility and obedience: the hallmarks of a saint But even before he became a famous preacher and spent the rest of his short life helping the poor, Anthony’s holiness could be seen in the way he dealt with the apparent failure of his mission to the Muslims. Although we cannot know his thoughts or feelings, we can learn a lot from his actions. We know that prior to leaving for Morocco, Anthony had spent ten years among the Augustinians studying the Scriptures, and we also know that he had left Portugal with the intention of preaching the Gospel. But as far as we know, he never spoke a word to the people of Morocco. We also know that when he preached in Forli two years later, Anthony astonished his confreres, and an early biographer confirms that in his early days as a Franciscan, he never spoke about his great learning. Even more than his great eloquence and understanding, Anthony’s humility and obedience mark him out as a saint, as a follower of Jesus Christ, who saved the human race through His humility and obedience to the Father. This short period in Anthony’s life shows his openness and willingness to go where he felt God was calling him and also his humble obedience to his religious superiors. He did not cling to his own ideas but let himself be carried wherever God’s will was sending him, much like his ship which found its way to Sicily though it had not intended to go there. But if Anthony was doing God’s will, why did he seem to fail? Why did he get sick and experience a shipwreck? We often like to believe that when we go where God sends us, when we follow God’s will, good things will happen; events will turn out to our benefit. And when we experience difficulties and trials, it is a sign that we have chosen the wrong path. But this is not what the Bible teaches, this is not what the spiritual writers teach, and this is not what Anthony believed. Jesus Himself taught us through His words and actions that obedience to God’s will leads to the Cross before it can come to the Resurrection. Challenges and suffering are a necessary part of being followers of Jesus Christ. But why? In his own words Anthony’s sermons are full of references to patience, humility, and obedience, all grounded in a deep understanding of Sacred Scripture. He understood the hard truth that holiness can only be achieved by letting go of our pride and selfishness and that Christian discipleship requires a purging of self-will through suffering.

The heart of the sinner is made hard by fire, for the fickle and unstable mind is hardened by the fire of tribulation, lest it run away in the love of temporal things. Solomon says that what a furnace does to gold, what a file does to iron, what a flail does to grain: that tribulation does to the just man. (Sermon for Septuagesima Sunday)

He also understood that trials in our life are not necessarily a sign of God’s displeasure but are often a sign of God’s favour as He strengthens the soul, helping it to turn away from earthly pleasures and run after heavenly things.

When a mother wants to wean her child, she puts a bitter ointment on her nipple. The child finds bitterness where it expected sweetness, and so is weaned from the milk it enjoys. In the same way, the grace of the Holy Spirit anoints the breast of temporal things with the bitterness of tribulation, so that by this bitterness man may be induced to reject the desired delight, and turn instead to that which is true. (Sermon for the second Sunday after Pentecost)

But at the same time, in one of those many seemingly paradoxical teachings of our faith, Anthony understood the joy that goes hand-in-hand with life’s trials, a companion to the denial of physical pleasures and of personal pride, which together lead to our goal: holiness, through abandonment to the Divine Will. Reflecting on the story of the fiery furnace in the Book of Daniel, he says:

Three virtues are represented by these three children, and whoever has them will come unscathed out of the world’s furnace. Sidrach (‘my beautiful one’) is chastity… Misach (‘laughter’) is patience, which laughs in tribulation. Abdenago (‘silent servant’) is obedience, which serves whole-heartedly, and remains silent as to the word of self-will. Whoever has these three virtues will be set free from the fiery furnace, the burning vices of this world, by the Angel of great counsel and the wind of dew, the grace of the Holy Spirit. (Sermon for the twenty-second Sunday after Pentecost)

Like St. Anthony, let us look on the struggles and shipwrecks of our lives with patience and joy, entrusting ourselves humbly and obediently to God’s will as He draws us ever closer to Himself. (All quotes are taken from Paul Spilsbury’s translation of The Sermons of Saint Anthony of Padua, which is available online as a pdf.)

If you want to learn more about the life of St. Anthony of Padua, check out S+L's documentary, Finding Saint Anthony: A Story of Loss and Light.