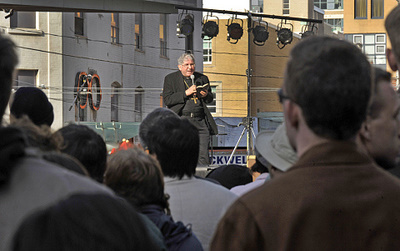 During the Pauline year, Salt + Light Television offered viewers the opportunity experience the writings of St. Paul through Lectio Divina with Archbishop Thomas Collins: A Year with St. Paul. Though the Pauline year has come to a close and Archbishop Collins’ monthly gatherings are on a summer hiatus, we are pleased to present a very special Lectio Divina held outdoors at Yonge-Dundas Square in the heart of a very busy downtown Toronto. The Lectio Divina was part of an event organized by the Archdicoese of Toronto this past May called St. Paul in the Square. It was a time to celebrate this great saint, and to gather together as a Catholic community from all corners of the Archdiocese. I remember it being an unseasonably cool May day for Toronto, a chilly wind at times, but the sun was shining and the hearts of the faithful were open to the Word of God. People were standing in the back, many sitting on the ground in front of the stage as Archbishop Collins reflected on Paul in the Areopagus as found in chapter 17 of the Acts of the Apostles. (and here we were -- in our own modern day areopagus!) This special edition of Lectio Divina with Archbishop Thomas Collins: A Year with St. Paul, can be seen Sunday, July 12th at 9pm ET with an encore presentation Wednesday, July 15th at 8pm ET. New episodes of Lectio Divina will return in September on Salt + Light, as Archbishop Collins takes a look at the Parables! - Photo by Bill Wittman, WP Wittman Photography. For more of Bill's pictures from the event, visit the Archdiocese of Toronto's St. Paul in the Square page HERE.