Something for this Sunday 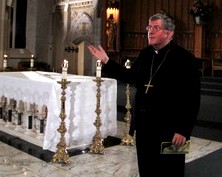 It's the May long weekend in Canada -- the weekend that unofficially marks the beginning of summer and a string of long weekends. If you're in and around the Toronto area on Sunday, May 17th, the Archdiocese of Toronto is hosting a very special event -- St. Paul in the Square. This gathering -- held outdoors at one of the busiest intersections in Toronto, Yonge and Dundas -- is a celebration especially for the Year for St. Paul. Archbishop Collins will be conducting a special Lectio Divina (separate from the Year of St. Paul series seen on Salt + Light), and Matt Maher will be performing in concert. For full details, click HERE. For those of you who will be at home on Sunday evening (or the following Wednesday) you can catch the May broadcast edition of our ongoing series Lectio Divina with Archbishop Thomas Collins: A Year with St. Paul. This month, Archbishop Collins reflects on the Supremacy of Christ, as we read about in St. Paul’s Letter to the Colossians! The May episode of Lectio Divina with Archbishop Thomas Collins: A Year with St. Paul, airs Sunday, May 17th at 9pm ET with an encore presentation Wednesday, May 20th at 8pm ET, only on Salt + Light Television!