Just after being appointed the Vatican's Secretary of State, Cardinal Tarcisio Bertone was interviewed about his love of sport, specifically soccer. He made headlines when he said he hoped the Vatican could one day have it's very own FIFA recognized soccer team. The media attention grew when it was discovered that the Vatican City State does, indeed, have two soccer teams: one made up of Swiss Guards and one made up of Vatican employees. Cardinal Bertone later confessed to the media that getting FIFA recognition for either of these teams was little more than a pipe dream. 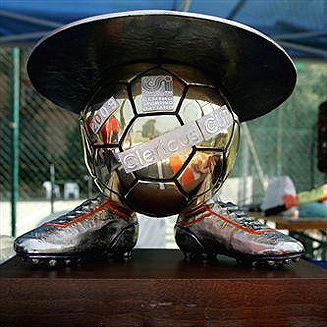 The Centro Sportivo Italiano, a Catholic run Italian sporting association, came up with a novel idea based on Cardinal Bertone's wish for a Vatican soccer team. It wouldn't be a FIFA recognized team, it wouldn't be a Vatican City team, but it would get priests playing soccer in the public arena. It would be called The Clericus Cup. Launched in spring of 2007, The Clericus Cup is a soccer tournament in which 16 teams representing the various seminaries and pontifical universities in Rome vie for the coveted Saturno-wearing soccer ball. The teams are split into two groups of eight teams which play for seven weeks. After seven weeks of "regular season" play the real fun begins....the playoffs. This year's Clericus Cup season kicks off today, Saturday, February 20th, at the Pontifical Oratory of St. Peter, which is blessed with two regulation size soccer fields and a spectacular view of the dome of St. Peter's Basilica. At 9:00am Rome time the North American Martyrs, official team of the North American College which was undefeated until loosing to Redemptoris Mater in the final game, takes on the Brazilian College. Last year's Clericus Cup winner, Redemptoris Mater, takes on Saint Anselm College at the same time. At 10:30 am Rome time AC-Colleges United (Anglo-Celtic Colleges) takes on the Gallic College team and the Polish Institute takes on St. Paul's Pontifical College. Make no mistake, this is not a backyard scrimmage. Clericus Cup league games are played according to rules laid out by FIGC, the Italian Soccer Federation, with a few small variations. In addition to yellow and red cards, which respectively mean that a player has a warning against them and that a player is expelled, referees can flash a blue card. The blue card means the offending player must leave the field for five minutes. Also, tie games are not allowed under Clericus Cup rules. At the end of regular playing time, if the game is tied the two teams go into shoot outs. 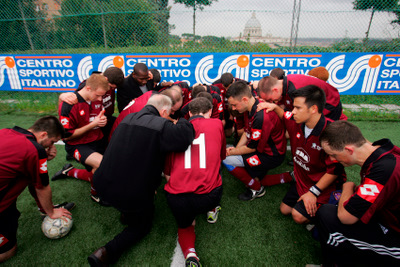 Of course, being a game between men of the cloth, no matter what the outcome the match ends not only with the traditional handshake between teams, but a short prayer. Anyone who wants to keep track of the stats, photos and even video footage can check out the tournament's new website www.clericuscup.it. Die hard fans can join the Clericus Cup fan page on Facebook. Or, keep checking back here for updates on the Clericus Cup series. Above: CNS photo/Alessia Giuliani, Catholic Press Photo