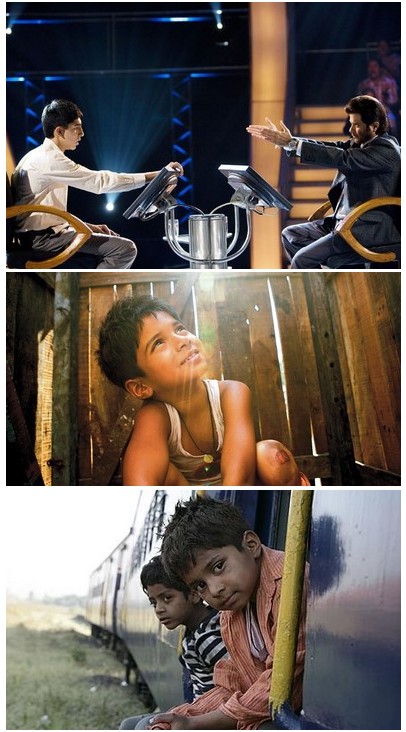 We watched many movies as a family over Christmas break, but none of them made the artistic and emotional impact on me that the 2008 production Slumdog Millionaire did. I will say that Slumdog Millionaire is one of the best movies I’ve seen.
Briefly, Slumdog Millionaire is the critically-acclaimed and award winning film by director Danny Boyle and screenwriter Simon Beaufoy that highlights the significant moments in a boy’s life as prompted by questions in a television game show.The scenes of the life in the slums impressed me for a couple of reasons. One, I found out that Beaufoy made three research trips to India and interviewed street children to get across in his script the massive energy and huge amount of fun and community in the slums. And this really came across during the police chase with the slum kids. It was almost enviable to see their love of life in such conditions – they’re real kids – playing, running around, making the best of their situation. I loved the fact that local cast and crew were chosen, and that they shot in Mumbai’s megaslum and shantytown parts of Juhu, which gave the film a very authentic feel and provided, I’m sure, a challenge for the crew to be filming with slum people around them!My family lived in the Philippines for 10 years, and seeing the “squatters” as we called the slum kids, was very common. I visited the Philippines again 10 years ago, and it hurt my heart to see the squatters begging by cars and to see their homes made of cardboards and roof parts submerged underwater in heavy rains. They could have been me and my siblings, my little brothers in torn shirts and dirty faces selling cigarettes and gum as the knock on car windows. I remember a man crossing the street dressed in shabby pants with a samurai sword of some sort in his hands that he was waving about, as if fighting an invisible enemy. I asked someone in the car about it, and he said, “Oh, that’s common. He’s probably gone crazy and this is his way of dealing with his reality.”On the other hand, I remember the moments of charity… I have a memory of my mom inviting the slum kids to our home for a party. She took them one by one, scrubbed their bodies clean and washed them down with a hose. I found out later that she did this as a going-away party before we left the Philippines for Canada. My parents respected the “squatters” in our area, appreciating their own joy and simplicity in the life that they have. It’s a great reminder that joy is not to be found in riches, but in relationship with others and sharing our good fortune with them.