Today marks Day 1 of the Holy Father's three-day visit to the Mediterranean island of Cyprus.
This being the first time a pope has ever set foot on Cyprus, Pope Benedict XVI's visit is highly-anticipated, though not without substantial political and ecumenical implications. Cyprus has been a country divided for over 30 years following a Turkish invasion in 1974 and has long since struggled as a nation to establish healthy relations between the various ethnicities (Greeks, Turks) and religions (Greek Orthodox, Muslim and Roman Catholic). 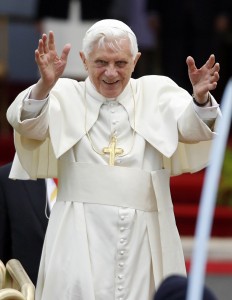 During his visit to the island nation, the Holy Father will also deliver the Instrumentum Laboris, or working document, for the upcoming Synod of Bishops for the Middle East. Join our hosts Kris Dmytrenko and Rita Sawaya as Salt + Light brings you full coverage of the Pope's 16th international papal voyage, and third of 2010. Coverage begins on Friday at 7am ET with the Holy Father's welcome address at the International airport in Paphos, Cyprus. Visit our website for ongoing blog updates, programming information and live streaming.