S+L in Rome: Silence in the piazza

On Good Friday evening at 8:50 pm, I was stepping delicately across the san pietrini (cobblestones) of Rome, heading towards home, huffing and puffing over a series of inter-cultural miscalculations and miscommunications, trying desperately to contain my bubbling emotions. Let's just say that had someone—anyone—stopped me on my way, they probably would have been the hapless victim of a multilingual tirade that had nothing to do with them. 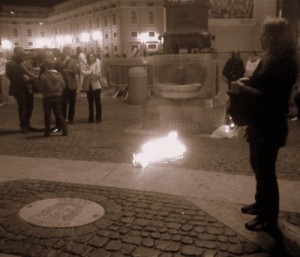 I was speed-walking through St. Peter's Square when a cross of candles caught my eye. At the base of one the lampposts in the centre of the piazza, a small group of people had made a cross using tea light candles. A man with a long beard and long hair, dressed in a long white robe, stood looking over the cross. I stopped dead in my tracks. “What? Jesus? Here? Flaming cross?” I looked over my shoulder to the opposite side of the piazza, where I had been headed. Carabinieri (the military’s national police force) were blocking the exit in advance of Pope Benedict's departure for the Roman Colosseum, where he was to soon preside over the Via Crucis. I sighed and looked up at the starry sky above the piazza. “Fine, I get the hint,” I said silently to He who wrote the stars. I got closer to the man who looked like Jesus, standing by the flaming cross. I heard one or two from the gathered group speaking a language I could not understand. An Italian man walking by with his son explained, “It's for John Paul II.” Suddenly it clicked. The group of people, I discovered, were Polish faithful who had gathered to mark the fifth anniversary of John Paul II's death. Just as I realized this, the bells of St. Peter's began to ring to mark the hour. As soon as the bells finished, a silence descended over the handful of people in the piazza. In my self-absorption and frustration, I had managed to completely forget that this Good Friday was the anniversary of John Paul's death, and 9:02 was the time he died. Tears filled my eyes, partly because that man is the reason I work today, and partly because I'm a woman and, in moments like this, when one suddenly and unexpectedly finds a haven of peace among the chaos, that's what I do. There was silence for about a minute and a half, and you could tell that everyone was thinking back to that same night five years before, when we were all gathered here, holding vigil with our spiritual grandfather as he peacefully slipped out of this world. Here we were: a group of Poles, a man who looks like Jesus, two police officers who had pulled up in their cruiser to see what was going on (and then shook hands with “Jesus” before chatting with him like old friends), a few random tourists, a polish reporter who lost her cameraman, and me – a girl from Vancouver. The silence was interrupted as a loud cheer rose from the far end of the piazza by the Porta Sant'uffizio, where the Pope's car and motorcade were about to depart. In the stillness of the piazza, there I stood, figuratively speaking, between John Paul II and Benedict XVI.