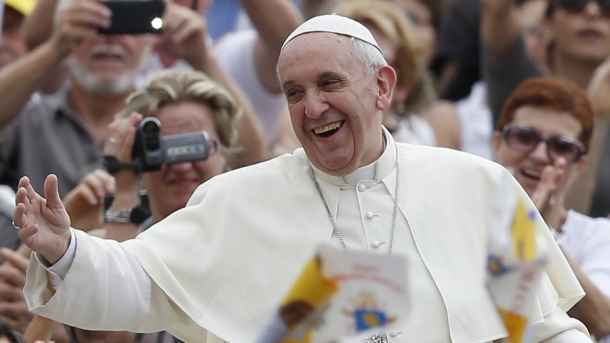 Recently I looked at something I wrote six months ago when Pope Francis had just been elected. Someone had asked me if he was going to be a progressive pope. My response was that I thought Pope Francis would be taking the Church where she needs to go.
What I have found most surprising of the last six months is that everyone is so surprised. "Pope Francis goes to Mass at a local Parish." "Pope Francis chooses to live at Casa Santa Marta." "Pope Francis celebrates Holy Thursday at a local detention centre and washes the feet of Muslims and women!" "Pope Francis rides in an open pope-mobile." "Pope Francis carries his own briefcase!" "...calls newspaper vendor; ...owns a cell phone; ...phones young man who wrote to him; ...cracks a joke.. laughs..." and so it goes. Every day there's a new surprise.
But this to me is not surprising. This is what it means to be a pastor. It's what most priests that I knew growing up where like. It's what we call being present. In Latin America we call it "acompañar" or walking with. It's how the clergy is supposed to relate to the laity. We walk with them; we are present to them; we are with them. In fact, it's how all people are supposed to relate to others!
And, it's no surprise that Francis' big thing is going to the peripheries; opening the doors of the Church, not so people can come in, but so that we can go out: Go out to the streets! Come down from the balconies; get out of the sacristies... And we don't need a program of evangelisation in order to do that. All we need is to not be afraid, to be authentic and to be present: "Go; without fear; to serve."
After WYD 2013 in Rio de Janeiro, Panamanian Archbishop José Domingo Ulloa spoke with local journalists: "After Rio, the Church, and especially the young people who make their pilgrimage through her, cannot be the same." He said that during WYD he saw how a "new way to live the episcopate and the presbiterate" was emerging. He added that, "young people taught [the bishops] that they want and expect shepherds that are closer, less distant and cold." He concluded by saying that from now on, bishops, priests and deacons are "moved to build a relationship of closeness with the people and with youth."
Is this progressive? I don't think so. Is it Church? Absolutely! It is that Apostolic Church that Jesus founded with one mission: To Go and make disciples of all nations and proclaim the Good News to all creation.
That's not where the Church needs to go. The Church has always been there; that's where we need to go and Pope Francis is the shepherd who is walking among us as we pilgrimage on our way there.
-
CNS photo/Paul Haring