Sing, choirs of angels: A reflection on Christmas hymns 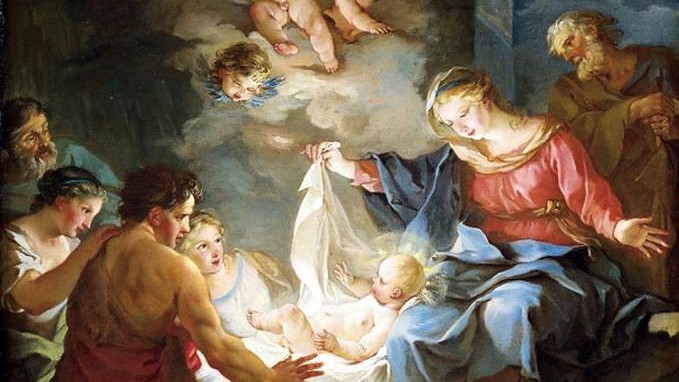 Nativity by Jean-Baptiste Marie Pierre (Source: Wikimedia Commons)
I once heard a priest say, during his homily, that people learn a lot of their theology from the hymns we sing in church – more so even than from homilies, he joked. He had a valid point. Hymns are full of theological themes which can be hard to get our brains around when they are discussed intellectually but which seem to make more sense when they are expressed poetically and set to music. The hymns at Christmas time are especially full of theological meaning that conveys the understanding of the incarnation of God in the flesh, and what that means for humanity. The popular Christmas hymn, "O Come, All Ye Faithful", has a verse when it gets very theological, although, I have to admit, I’m not sure I noticed it before I started studying theology. I must have thought they were just poetic words in a nice Christmas hymn, but if you look closely, some of the lyrics are pulled right from authoritative texts. The verse I’m referring to is:

God of God, light of light, Lo, he abhors not the Virgin's womb; Very God, begotten, not created O come, let us adore Him, Christ the Lord.

Here we have descriptions of God the Son taken directly from the Nicene Creed where it explains the Second Person of the Holy Trinity. It affirms Jesus Christ as being truly divine and not a creation. With the Father and the Holy Spirit, Christ is the same God and the same light. He is fully divine, but at the same time, he takes on human flesh and becomes fully human to reconcile us with the Father. In a later verse, the phrase, Word of the Father, now in flesh appearing, is sung, emphasizing the same credal concept of God the Son, who is the eternal Word of the Father, taking on mortal flesh. The phrase, Lo, he abhors not the Virgin's womb, comes from the ancient Latin prayer known as the "Te Deum". Specifically, it is from the English translation in the Anglican Book of Common Prayer (here is a modern Catholic translation). The “Te Deum” is traditionally sung in the Liturgy of the Hours every day at Matins (although it is omitted in Advent and Lent, like the Gloria at Mass). It is a hymn of praise to God and is structured like the Creed, making statements of faith about God in three Persons. It describes Christ as the “everlasting Son of the Father” who became human to redeem us, overcoming death to open the kingdom of heaven to all. Christmas hymns aren’t just festive songs; there are some deep theological references in them! 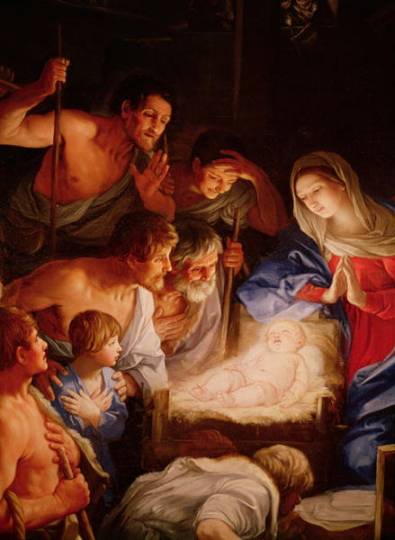 The Adoration of the Shepherds by Guido Reni (Source: Wikimedia Commons)
Another hymn that is full of theological meaning is "Hark! The Herald Angels Sing", which I always think of as embodying the climax of Christmas and the birth of the Messiah. Hearing it sung in procession during Midnight Mass is always a powerful experience. It begins by expressing how the birth of Christ is the “triumph of the skies”, reconciling humanity with God and freeing us from sin. It then gets into the Christology of the Creed and Scriptures, expressing theology set to music:

Christ, by highest heaven adored Christ, the everlasting Lord, Late in time behold Him come Offspring of a Virgin's womb: Veiled in flesh the Godhead see, Hail the incarnate Deity Pleased as man with man to dwell Jesus, our Emmanuel

Again, Christ is described as “everlasting”, one of the three eternal divine persons who are one God, who takes on flesh to dwell among humanity for our redemption. This verse also refers to the Old Testament prophet, Isaiah, whose book is prominent in the lectionary during the Advent season leading up to Christmas. At Mass for the Fourth Sunday of Advent, we heard the prophecy from Isaiah 7:14: “Therefore the Lord himself shall give you a sign. Behold a virgin shall conceive, and bear a son, and his name shall be called Emmanuel.” Emmanuel means “God with us”, and Christ is interpreted as being the sign of God’s presence with us, coming from the womb of a virgin (or “young woman” in newer translations), according to the prophecy of Isaiah. The last section of this hymn also has important theological significance:

It expresses how God puts glory aside and becomes human in great humility, as God the Son, the eternal Word, is given to humanity “veiled in flesh”, as Jesus Christ. Through the Incarnation of God, humanity is redeemed and the hereditary death that began with the fall of Adam and Eve is vanquished. Christ becomes the new Adam, the first of a newborn humanity reconciled to God. It’s a really profound message, and music has the ability to sum up these teachings and express them in a powerful way. There are many other hymns with deep theological meaning, but I think “O Come, All Ye Faithful” and “Hark! The Herald Angels Sing” are two of the most compelling Christmas hymns that encapsulate the meaning of the season. Be sure to listen closely to the music at Mass during Christmas time, and look for meaning contained in the hymns we sing as we commemorate the birth of God in the flesh. May everyone have a merry Christmas season, and enjoy the blessings of God through Christ and his Blessed Mother.

Looking for more Christmas reflections? Check out our Advent and Christmas webpage!