As you may have read in previous posts, Salt and Light’s first angelic experience in the city said to offer just that, came in the form of a shiny statue (and might I add, quite the keepsake!). Our second however, came in the form of a tour guide, restaurant connoisseur, museum expert, knower of LA’s best kept secret (Manhattan Beach) and Dreamworks “Effects Man Extraordinaire,” all in one. Though I’m certain that his latter title exists in a more official form, we are convinced that Mark Matthews is above all, a true friend.
We were graced by his incredible hospitality all weekend long and were honoured to have him join us as an adopted Salt and Lighter for the 2008 Gabriel Awards dinner on Saturday evening. Our dinner invitation was returned ten fold as the “Adventures with Mark Matthews in LA” led an unknowing Salt and Light team to experience: the pallet tickling tastes of Californian cuisine, the treasure hunting fun of Beverly Hills Garage Sales, a rediscovery of the exhilarating game of ‘freeze tag’ on the beach, the marvels of the Getty, and the (above smog level) breathtaking views of the city. 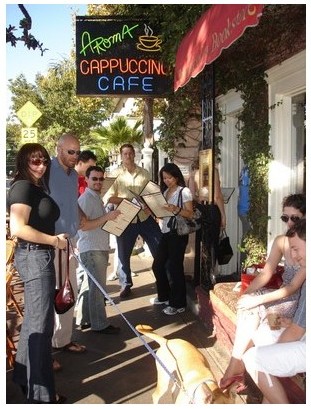 All of this was coupled with introductions to some of his equally inspiring friends in the faith and in the industry (two things that don’t often go together). Sharing experiences with our new acquaintances, we discovered that the LA community of young Catholics is a vibrant and ambitious one. Simply being a witness in what can often be a vicious profession, you can imagine our surprise in learning the initiatives these young professionals have taken on. From ‘prayer and pasta nights’ hosted at Family Theatre Production Studios to the 300 person monthly gathering for LA’s Catholic Underground, it’s obvious that LA’s young Catholics are on fire and indeed making their mark in Hollywood. A few examples of just how they are doing it include the Act One Program that focuses on Christian screenwriting since, as Mark puts it: "It’s really the stories that have to change." As successful as these initiatives are, they don’t come without a large set of challenges. Mark explains: ‘Hollywood is a major transmission point of culture. It's a very self centered part of the world, and this self centeredness is reflected in so many ways, from the way people drive, to movie plots, to overall morals. Fight it as we may, we all know that the only real agent of change is faith. True Holiness is the only thing that will transform this culture.’ When asked if he had encountered any personal challenges in living the faith in Hollywood, Mark answers: “I’m very fortunate to have found catholic fellowship because without it, it would be a very lonely place. The environment is a hostile one, you almost have to go "underground" as a Christian, especially in the corporate world and that can be a difficult thing to do without sacrificing your morals. There are however, significant signs of hope. Catholic Underground is one of them for me. Just the fact that ministries like this one exist and that people are searching and coming by the hundreds is hope for me. Not to mention that Hollywood appears to have finally woken up to the fact that Christianity sells! (ie."The Passion") Things are definitely looking up for Catholics in Hollywood and I’m so excited to be a part of it all.” Next time you’re watching a DreamWorks picture, don’t forget to scan the credits for this guy’s name. And if you can, please remember to pray for all our brothers and sisters in the faith working hard at spreading Christ’s message of love in the Hollywood Hills and Boulevards. Thanks Mark for your witness, and for your friendship.