When I was reading about the Canadian Martyrs last week, their feast day was last Friday, I came across a July 7th 1930 Time Magazine article detailing Pope Pius XI's activities for July 7th. On the second page of the article was the following:

A light but bulky package arrived at the Vatican last week from Alaska, addressed to Pope Pius XI, a surprise gift from hundreds of Catholic Eskimo children. The contents: a large piece of birchbark. Painted on its inner surface was a dog sled carrying nuns and a missionary priest through the main street of Holy Cross Mission, Alaska, towards a primitive rendering of the dome of St. Peter's while a female figure, representing St. Therese, scattered celestial petals from the clouds. "This," announced official L'Osservatore Romano, "is the most precious gift yet received at the Vatican."

The L'Osservatore Romano, of course, is the official newspaper of the Vatican, a means for the Pope to communicate his message to the world. It's a charming story, and a delight to consider the efforts that the children would have put into their gift to the Holy Father. 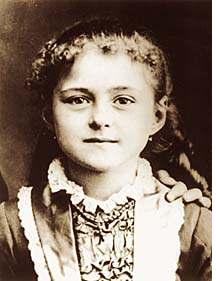 I couldn't help but think of my own efforts as a small boy in gifts that I gave to my parents, or to my grandmother. They may not have been glorious artistic masterpieces, but they were crafted with love, and my family regarded them as precious treasures. The simplicity in these gifts show us that we don't need flashy or ornate presents to express love. Much love and great beauty can be expressed and contained in small tokens. As St. Thérèse of Lisieux depicted scattering petals from the clouds emphasized throughout her whole life: simple gestures done with great love.