Shakin' up the Synod of Bishops: the pastoral challenge 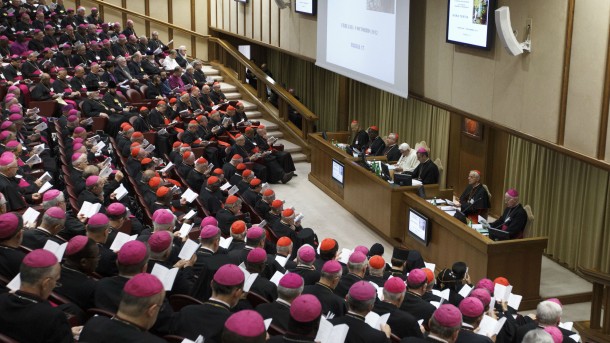 By Sebastian Gomes
It seems that no event or program of the Vatican or the Pope can occur without the question of continuity being raised.  With Tuesday’s release of the Preparatory Document for next October’s Extraordinary Synod of Bishops on the Pastoral Challenges to the Family in the Context of Evangelization, already there has been considerable discussion around questions of continuity.  Is this preparatory document different from previous preparatory documents?  How are they different?  How much of the difference is coming directly from Pope Francis?  What does this mean for future Synods and collegiality in general?
These are very legitimate questions in the context of the pontificate of Pope Francis.  While he has continually advocated the practice of discernment and warned against an ultra-efficiency model that would turn the church into an NGO, he himself has moved strategically and decisively in matters of bureaucratic reform, especially regarding the Vatican bank and the Office of the Synod of Bishops.  He has made it clear that he is operating from an explicit mandate, given to the successor of Pope Benedict XVI by the Cardinals during the congregation meetings leading up to the conclave.
The varying reactions to these and other “changes” in the Catholic Church today are striking in this regard: they expose a kind of collective perception that the institutional church is a static entity.  Whether you think change is good or not, experience has probably taught you that the Catholic Church does not change.  In one sense, this perception is accurate.  For example, in the centuries leading up to the Second Vatican Council one of the mantras of the hierarchy, especially in the church's response to modernism, was “always the same.”  But in another sense, this perception is false.  When Pope Paul VI established the Synod of Bishops near the end of Vatican II, he likened it to a “human institution,” that, “can be improved upon with the passing of time.” (Apostolica Sollicitudo)  The only honest answer seems to be that the church does and doesn't change. So far, Pope Francis’ pontificate has served as a tangible reminder of this.
That leaves us with the question of what exactly is different at this initial stage of a forthcoming Synod.  Three bishops spoke at the press conference yesterday.  Archbishop Lorenzo Baldisseri, the Secretary General of the Synod of Bishops acknowledged that the process is moving quickly, and all the more so because of the structural, methodological and functional reforms that Francis is pushing.  This Synod will run differently from previous Synods.
The Relator General for the Synod, Cardinal Péter Erdo made the important point that this Extraordinary Synod will act as a bridge between the 2012 Synod on the New Evangelization and the 2015 Ordinary Synod on the Family.  Linking Synods is nothing new, except for the fact that no Apostolic Exhortation was written after the New Evangelization Synod last fall (Pope Benedict resigned before writing it and Pope Francis has said he will not write it).  If there was a kind of strategic and thematic bridge between previous Synods, as there was between the Eucharist in 2005 and the Word of God in 2008, the bridge between these Synods, whatever it looks like, will look different.
A very significant reflection came from Archbishop Bruno Forte who will serve as Special Secretary for the Synod.  He highlighted the pastoral nature of the theme: the Family.  This is clearly seen in the Preparatory Document, which offers a series of reflection questions to the particular churches around the world.  They are extremely pastoral and practical in nature.  For example, in the section entitled “The Pastoral Care of the Family in Evangelization,” a question reads: “What pastoral care has the Church provided in supporting couples in formation and couples in crisis situations?”  Such questions open the Synod up to the lives and experiences of the people on the ground.  We can assume that whatever results from the Synod, it will have very practical application.  That is new.
At the end of the Synod on the New Evangelization in 2012, the bishops wrote a pastoral message to the People of God in which they reflected on the current crises of marriage and family life.  After reiterating the importance of family life in the church and society, the bishops addressed those living in irregular, often difficult family situations:

To all of them we want to say that God’s love does not abandon anyone, that the Church loves them, too, that the Church is a house that welcomes all, that they remain members of the Church even if they cannot receive sacramental absolution and the Eucharist. May our Catholic communities welcome all who live in such situations and support those who are in the path of conversion and reconciliation. (Message, 7)

This type of language is reflective of the pastoral approach about which Archbishop Forte spoke.  It is powerful language that contains a hint of the Franciscan spirit that has subsequently taken the world by storm over the past seven months.  With the very pastoral and practical emphases Francis has given to the Synod of Bishops, we might expect more language of this kind in the coming years, and more importantly, strategies for living it at the ground level.