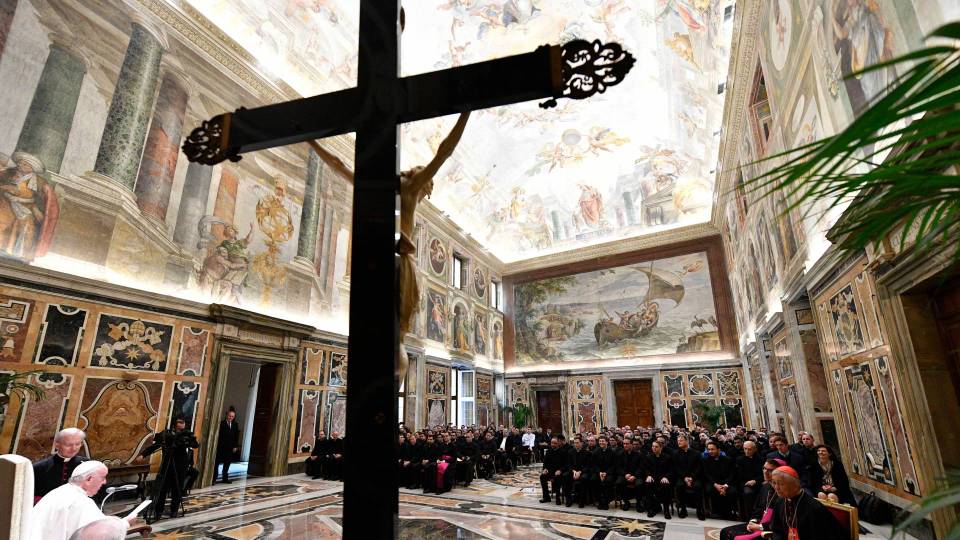 Pope Francis speaks to seminary rectors and staff members from Latin America who were in Rome for a course sponsored by the Dicastery for Clergy. The audience was in the Clementine Hall of the Apostolic Palace at the Vatican Nov. 10, 2022. (CNS photo/Vatican Media)
VATICAN CITY (CNS) -- The mission of a seminary "is not to form 'supermen' who pretend to know and control everything," but to help seminarians become priests who are humble servants of the communities they continue to belong to, Pope Francis said. "The Lord calls some of his disciples to be priests, that is, he chooses some of the sheep from his flock and invites them to be shepherds of their brothers and sisters," the pope wrote in a speech prepared for a group of rectors and staff members of seminaries in Latin America. As priests, "we are fellow disciples of the rest of the Christian faithful and, therefore, we share the same human and spiritual needs, just as we are subject to the same frailties, limitations and errors," he wrote in the text he handed to the group Nov. 10 before speaking to them off the cuff. The rectors and staff members were attending a course sponsored by the Dicastery for Clergy. Pope Francis told them his prepared text was 12 pages long and "very good" because several people had worked with him on the draft, so they should read it. But he also wanted to share "what I have in my heart." When he was preparing for the priesthood, he said, everything was done in a very strict order, step by step. "And the one who lasted until the end would be ordained, and the others would fall by the wayside or drop out." But today, he said, much more personal attention is needed because "rigid formation schemes" train rigid priests, which is not what the church needs. While "clear doctrine" is essential, young people today have many questions that must be heard and taken seriously. But the pope said he really wanted to talk about "an obsession that I have," which is to emphasize how candidates for the priesthood must learn "proximity" or "closeness" to God, to their people, their peers and their bishops. "The busier a priest is, the more he has to lose time in prayer," the pope said. "In other words, closeness to the Lord in prayer. That is the first thing." And "we cannot have priests who are like directors of a parish business, who lead at the top of their voices," he said. They must know how to dialogue, to hold an elderly person's hand and to visit the sick. Priests also must be close to their bishops, because "there is no church without a bishop," the pope said. Some priests may not like their bishops, but they must respect them, "not to kiss up to them" but because "he is their father." "The gifts of grace and the traits of a wounded nature," marked by a tendency to sin, are normal parts of the life of every baptized person and are present in the seminarians as well, the pope wrote in his prepared text, so seminary training needs to help them become aware of both as they grow in faith and basic human maturity. Pope Francis urged the rectors and seminary staff to help candidates for the priesthood learn "to read their own history" with the eyes of faith, seeing how and where God was at work and where they may have gone astray. The rector and staff also must recognize that the way they live their own lives has a big impact on the seminarians. Candidates for the priesthood should be able to see how "a healthy human maturation" involves overcoming difficulties and periods of crisis through a constant renewal of faith and reliance on the Lord, the pope wrote. Since "one of the indicators of human and spiritual maturity is the development and consolidation of the ability to listen and the art of dialogue," he said, and those "are naturally anchored in a life of prayer, where the priest enters into daily dialogue with the Lord, even in moments of aridity or confusion." The work of priests, especially in a seminary, is not easy, the pope said. Priests are human and experience "frustration, weariness, anger and powerlessness, which is why it is important to turn every day to Jesus, getting down on our knees and in his presence learning from him who is meek and humble of heart, so that little by little our heart learns to beat to the rhythm of the master's heart."