Sell the Vatican to Feed the Poor? 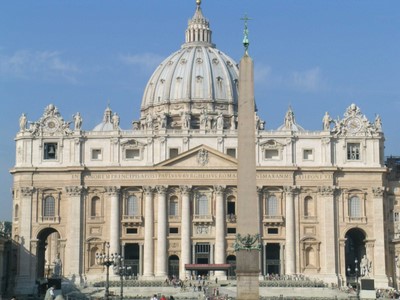 By the time this blog gets posted it is likely that more than a million internet users will have seen a crass and disrespectful rant against the “wealth” of the Vatican by the notorious comedian Sarah Silverman. In the You Tube piece Silverman accuses the Vatican of hording wealth and says by selling Vatican City the Pope can feed the planet, and still have enough money left over to buy some nice condos for himself and his “friends” (presumably she means curial Cardinals). Silverman is a comedian and success in her career involves making people laugh by poking fun at prominent people, institutions and socio-cultural mores. I don’t typically give a second thought about the opinions of comedians. But in this case Silverman’s point is one I have heard all too often. We probably all know someone who claims to have a major difficulty with the Vatican’s great wealth in the face of widespread global poverty. Since Silverman was playing on a widespread distortion in society’s way of thinking I believe it warrants a response. And she is getting one. Silverman’s irreverent and profane stand-up routine has garnered her much attention. She’s been accused of anti-Catholicism by the Catholic League for Religious and Civil Rights and her comments even became a subject of debate at the Synod of Bishops for Africa in Rome. Archbishop John Olorunfemi Onaiyekan of Abuja told reporters covering the synod "I think the joke is not only offensive, but in bad taste and stupid. What they should be asking is: What is the Vatican doing about poverty in the world?" The answer is a lot. The Catholic Church is the largest charitable organization on the planet with charitable donations dwarfing the likes of the Salvation Army, the Red Cross, or the Bill and Melinda Gates Foundation. As for the often heard claim that the Vatican should sell its priceless artifacts Vatican correspondent John L. Allen Jr. offers a different perspective in his book All the Pope's Men. He says one reason the Vatican will never have a fire sale of its artistic valuables is that such treasures are not the Vatican's to sell. They are considered the patrimony of the history of humanity, entrusted to the Holy See for posterity. (In fact, Vatican accountants value each piece of art at just one euro each for purposes of internal bookkeeping.) Allen has also frequently lectured on what he calls the “myth” of Vatican wealth. He points out that the Vatican’s annual operating budget is less than a quarter of Harvard University’s, and that the University of Notre Dame has an endowment four times greater than the Vatican’s. Has anyone asked those two universities to sell their buildings and lecture halls and cash in their endowment to feed the poor? The arguments against the Church’s wealth will probably never go away. Similarly Christ said the poor will always be with us (Matthew 26:6). The best we can all do is to do our best to fight both realities: one, through reasoned argument; the other through our own charitable giving to the many needy people on our planet.