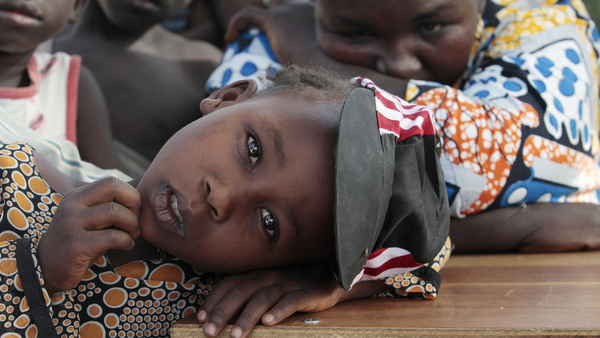 A girl displaced as a result of Boko Haram attack in the northeast region of Nigeria rests her head on a desk at a camp for internally displaced people. CNS photo/Afolabi Sotunde, Reuters.
One of the most interesting conversations I had during my stay in New Orleans was with Sr. Cecilia Dimaku of the Sisters of the Sacred Heart, Nigeria. I know most people haven’t ever heard of this congregation, but theirs is a story worth telling.
When Archbishop Ekpu founded the Sisters of the Sacred Heart in 1975 he did so in the aftermath of the Nigerian Civil War (1967 - 1970), a particularly intense and tragic time of tribal conflict.
Also known as the Biafran War, the conflict tore the country apart. By the end of it, two million people had died from famine or conflict.
It is a lamentable story, but one that sets the stage for the arrival of the Sisters, so I’ll just quickly summarize here.
After Nigeria gained independence from Britain in 1960, six years later the Muslim Hausas in Northern Nigeria began massacring the Christian Igbos, prompting thousands of Igbos to flee to the east where their people were the dominant ethnic group. The Igbos doubted that Nigeria’s military government would allow them to flourish, so in 1967 they established the Republic of Biafra for their safety and security.
Unfortunately, diplomatic attempts to reunify the country promptly failed and they were plunged into a terrible war. A war that Nigeria won after it secured the oil fields -the main source of revenue for the fledgling Biafran Republic. The resulting loss of revenue led to a tragic famine in which an estimated one million civilians died.

We know that no culture or civilization can stand except when the womenfolk of that society have assumed their proper place in it. Archbishop Patrick Ekpu, Founder of Sisters of the Sacred Heart of Jesus.

It is in the aftermath of this crises that the Sisters of the Sacred Heart were born.
Archbisop Ekpu’s hope was that these holy women would be a symbol of unity, as it gathered women of all tribes together; making manifest Christ’s desire “that they may all be one” from the Gospel of John.
No small vision, when you consider that Nigeria is inhabited by over 500 distinctive ethnic groups. 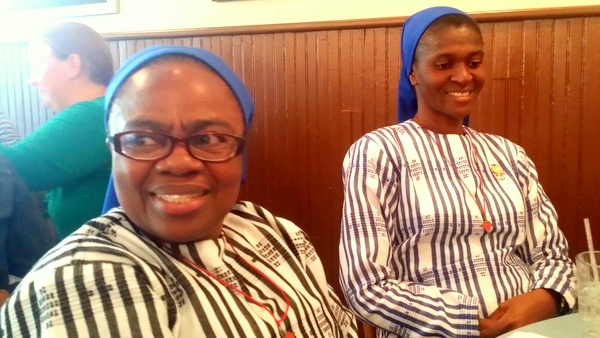 Left, Sr. Cecilia Dimaku, Former Superior General of Sacred Heart Sisters seated next to Sr. Evelyn.
But that’s not all, the Archbishop also hoped that the new Order would celebrate what is beautiful in African culture. He had rightly intuited the need for a Christian witness that was also an inculturated one.
Up until that point in his country’s history, most nuns were missionaries from other parts of the world, many of them Irish. It seemed time for young Nigerian girls to see an African model of holiness and womanhood.
One of the ways that the Sisters gave expression to this understanding was by adopting a traditional African-style habit and veil.
It was so distinctive in fact that when Pope John Paul II visited Nigeria he commented that it stood out as ‘a concrete expression of inculturating what is beautiful and rich in African culture’.
Fast forward to today, and their charism - the work of affirming all that is good in Nigerian culture while attending to downtrodden women seems to be as important as ever. 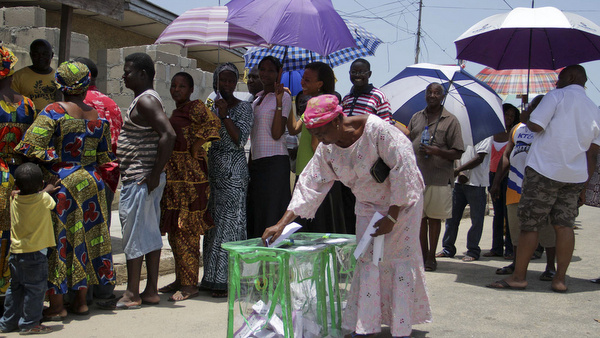 Nigerians vote near Lagos April 26, 2011. A Nigerian cardinal called on candidates in the country’s elections to focus on issues of importance to voters rather than on character assassination and smear tactics. CNS photo/George Esiri, EPA
The Sacred Heart Sisters promote the dignity of women through apostolates in: education, pastoral ministry, medical works and counselling. Much of their work is with young women who have been forced into or have deliberately entered into prostitution.
And, as Nigeria increasingly plays a leading role on the continent of Africa as an economic giant coupled with its growing media industry (Nigeria’s Nollywood is second only to India’s Bollywood) it is clear that the country is poised to influence the hearts and minds of many in Africa, and beyond.
And that begs the question, in a global reality where Nigeria is growing in influence and power, what kinds of cultural values will ultimately be communicated?
Only time will tell, but we can be assured that the Sister’s witness to unity and the promotion of the dignity of women will go a long way to building a culture of peace in Nigeria.

The Producer Diaries - S+L producer, Cheridan Sanders shares her experiences developing an original S+L television series featuring seven women religious communities located in Africa, the Philippines, Timor-Leste and the United States. The globe-trotting adventure invites viewers to delight in the spiritual gifts of each of community and witness the extraordinary work of: educating girls, ministering to outcasts, preventing human trafficking, and so much more. The production is an exciting collaboration with the Loyola Institute for Ministry in New Orleans and is made possible through a $900 000 dollar grant from the Conrad Hilton Foundation.