Last year I learned about a talented singer, Sarena Paton, in relation to a Remembrance Day Concert. Recently I heard that Sarena was going to be performing a the Lower Ossington Theatre in Toronto on Friday, June 10. 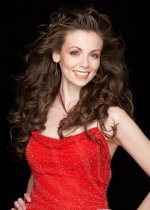 We don't usually blog about these things, but Sarena was our featured artist on S+L Radio last week and if you are in the Toronto area, looking for something to do on Friday night, I highly recommend this concert. Sarena just returned from Mexico, after performing with renowned countertenor Fernando Lima. On Friday Sarena will be presenting an intimate evening with conductor/composer/arranger and pianist Charles Cozens.  Together they will feature selections from her album La Carissima, as well as a few other  favourites from the classical and pop worlds. If you can make it this Friday, or are not in the Toronto area, later this month, Sarena will appear with Maestro Kerry Stratton’s Grand Salon Orchestra at the Brockville Centre for the Arts in Brockville, Ontario in We’ll Meet Again – A Tribute to Vera Lynn on June 29 and 30. Sarena is also a songwriter. Her latest album La Carissima, features classical arias in Italian and Latin and other more contemporary compositions in Italian, Spanish and English, and two songs, written by Sarena.  When I spoke to her last week, she told me that she was hoping to write more music and that her next album would have a lot more originals. La Carissima was produced by Terry Sawchuk (who also has produced Matt Dusk and Eleanor McCain) and was recorded with the Moscow Studio Symphony Orchestra. If you are someone who loves either classical music or pop, La Carissima will definitely appeal to you. In 2010, Sarena traveled to Argentina to perform with  Fernando Lima, for an audience of 15,000. Since then, they've repeated this partnership, with concerts in Mexico, Spain & Canada. As well as Fernando Lima, Sarena has performed with  John McDermott, Cape-Breton songstress Rita MacNeil, and Welsh musical theatre star Peter Karrie, playing the famous Phantom of the Opera role, Christine Daae, among others.  She has also been featured at the World Synchronized Skating Championships and World Junior Hockey Championships. Remember that Remembrance Day concert? Well, Sarena's second album Remember,  attracted the attention of Veterans Affairs Canada and since then she has remained involved in the veterans’ community.  She told me that both her grandfather and grandmother served during the war and so this issue has a special place in her heart. Her strong connection and commitment to WWII veterans and current military and peacekeepers has taken her to repeat performances for the Canadian government on Parliament Hill in Ottawa, Queen’s Park, in Toronto, the Canadian Military Tattoo and ceremonies honouring fallen OPP and RCMP officers.  She was also honoured to perform the songs of Vera Lynn on Juno Beach in France. So remember, Friday, June 10, 2011 at 10:30pm. Tickets and information for this performance can be found here. Click here to listen to or download the S+L Radio program featuring Sarena Paton