Salt of the Earth inspiration leads to Fall of Wall 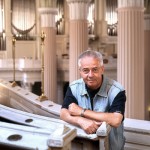 This past Monday was the 20th anniversary of the Fall of the Wall.
Thousands of people gathered in Berlin to commemorate the fall of the wall which separated the city’s east and west during the cold war. The wall was built in 1961 by the East German Government to end a constant flight of its citizens to the west side. People say that this action, the fall of the wall, was the defining moment for the end of communism and of the Cold War. To celebrate the anniversary, German Chancellor Angela Merkel was joined by former Soviet President Mikhail Gorbachev in crossing a bridge which was at the place of the first checkpoint that was opened, and former president of Poland, Lech Walesa pushed the first of a line of giant dominoes, made by more than 15,000 children from around the world – many from countries where real walls still exist – in a symbolic re-creation of the fall of the wall. It was a time to celebrate – but in nearby Leipzig, Protestant Father Christian Führer, former Pastor of the Church of St. Nicholas, had other memories. He recalls how the peaceful protests that brought down the wall began with regular Monday peace prayer-evenings at his parish, meetings that he had started in 1981 and that became regular weekly gatherings in 1982. These “Peace Prayers” were open to all, Christian and non-Christian and focused on the message of the Beatitudes. With time, the “Peace Prayers” grew in size and popularity until October 9th, 1989 when 70,000 people showed up for the largest demonstration ever to be seen in East Germany. The police were ready for violence, but were not prepared for candles and prayer, which is what they encountered. They had to withdraw without one single shot being fired. A month later, the wall came down. Fr. Führer recalls how the non-violent message of the Sermon of the Mount inspired them to protest peacefully. He was also personally inspired by Jesus’ call from Matthew 5:13 to be the salt of the earth – which means you must get involved. The real miracle, he says is that this was a revolution that grew out of the Church: "No broken windows, no people beaten, no one killed." And without Liepzig, the Fall of the Wall would have never happened. Mikhail Gorbachev always said the fall of communism could only be credited to Pope John Paul II – and that’s pretty neat, coming from him – but to know that another momentous event took place because of prayer, because of the leadership of a pastor – and because of Matthew 5:13 - that’s also very cool. Click HERE to read an extended interview with Fr. Führer.