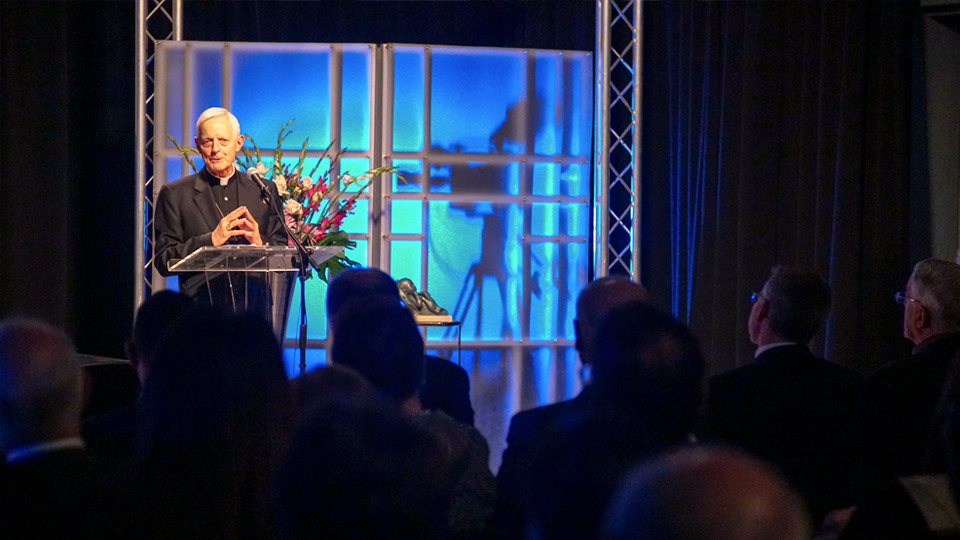 Photo: Salt + Light
Formal Dedication Ceremony Father Michael J. McGivney Studio of Salt and Light Television Toronto, Canada Thursday, May 25, 2017 by His Eminence Cardinal Donald Wuerl, Archbishop of Washington Your Eminence Cardinal Thomas Collins, Your Eminence Cardinal Gérald Lacroix, brother priests, religious, and in a very special way, Father Federico Lombardi and particularly the CEO, founder and guiding hand of Salt + Light, Father Thomas Rosica, Deputy Supreme Knight, Patrick Kelly, of the Knights of Columbus, distinguished guests and benefactors of Salt + Light, members of the Congregation of Saint Basil, together with all the members of the Salt + Light family, dear brothers and sisters in Christ. It is a great pleasure for me to join you on the opportunity of the dedication of the new Salt + Light communications center and the Fr. Michael J. McGivney Studio. I will take this occasion to offer these words of greeting from so many of your friends and admirers in the United States who benefit daily from the work of Salt + Light. I first came to know of this extraordinary ministry years ago when I met Father Rosica who was covering the events of one of the Supreme Conventions of the Knights of Columbus. The more I learned of this extraordinary ministry the more I came to appreciate it and hold in admiration all of you who are a part of it. During the 2012 Synod of Bishops on the New Evangelization, I had occasion publicly to thank Salt + Light for being the “sound and vision” of that great gathering of Church leaders called by Pope Benedict XVI on the New Evangelization. In that context, I came to meet so many of you and my admiration only increased as I recognized both the youthful energy and the enthusiasm as well as the high level of competence and professionalism that mark Salt + Light. Centuries ago, Saint Paulinus, Bishop of Nola in Southern Italy, wrote to a young missionary bishop who was then facing the challenges that Salt + Light does now. He was called to pass on the faith to so many who had never heard of or encountered Christ. His words of encouragement to Bishop Nicholas reflect the mission of Salt + Light and its team of evangelizing disciples. He wrote, “Per te barbari dis cunt resonare Christum corde Romano” – and through you the non-catechized, the marginalized, the secularized will learn to echo Christ with a Roman heart. Salt + Light and this state-of-the-art studio with this spacious broadcast set and all the production and editing rooms tells us how you intend to carry on your longstanding ministry of echoing Christ to an ever-increasing audience throughout the world. But you do this task with a noticeable characteristic – you authenticate your message by your particular devotion to Peter. You echo Christ with a Roman heart. The core of the Gospel message is the same as it has always been from the beginning. Yet, it is announced to meet the circumstances of every day, our day, today. We hear on the lips of the Successors to Peter different accents but always the one true voice of the faith. Whether it was Pius XII, Saint John XXIII, Blessed Paul VI, John Paul I, Saint John Paul II, Benedict XVI or now Francis, we recognize Peter. Today, he bears the name Francis. You teach others to echo Christ with a Roman heart so that your message and their faith rests firmly connected to the rock of the Church. This is the trademark of Salt + Light. Later in the renewing synods of 2014 and 2015 on the challenges to marriage and the beauty and wonder of the Catholic vision of marriage, the extraordinary gift of Salt + Light to the English speaking world became so evident. You, in Canada, have long been accustomed to this great gift but recent synods and the collaboration with the Vatican Press Office gave Salt + Light the opportunity to become truly the “sound and vision” of the Church’s mission and teaching on marriage. With great affection, I recall the ease with which our Holy Father, Pope Francis, gathered with you, Father Rosica, and the Salt + Light crew for conversation. It was clear that he greatly appreciated your role in the synods that were so dear to him and so significant for the Church Universal. On a more personal note, I want to express my appreciation for the enormous service you provide the Church in making available every day the homilies of our Holy Father as well as the text of other talks he gives in nurturing the faith of the Church. So often I am able in daily homilies to begin, thanks to Salt + Light, by saying, “Earlier today, Pope Francis said in a homily…” This makes life much easier for me and adds profound substance to whatever I might want to say. This evening, I join my voice to so many others from Canada’s neighbor to the South and say, “Congratulations” on this extraordinary accomplishment that permits Salt + Light to extend its mission and service. May God continue to bless all of you and expand your influence throughout the Church through the opening of this communications center.