The crowds shouted "Santo Subito" -- Sainthood now! - at his funeral, and now some six years later he'll be joining the ranks of the saints! 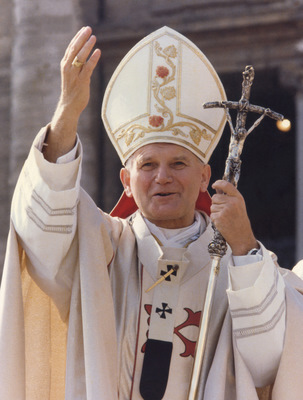 This Sunday Pope John Paul II will be declared Blessed. Our coverage for the Beatification Mass begins at 3:30am ET/12:30am PT on May 1st, and includes our production Thank You, John Paul II. Catholic News Service Rome Bureau Chief John Thavis will also weigh in, and I will be joined by Deacon Paul Hrynczyszyn of the Diocese of Hamilton, Ontario. Deacon Paul is just one week away from his ordination to the priesthood -- and nearly nine years removed from when he read in front of John Paul II at World Youth Day Toronto's Evening Vigil! The Beatification Mass itself will begin at 4am ET/1am PT, and we will be repeated throughout Sunday. The day before, on Saturday, April 30th, there is a special prayer vigil from Rome’s Circus Maximus in anticipation of Pope John Paul II's beatification. This evening has two parts: the first part will recall the words and actions of the Polish Pontiff, and includes testimonies from John Paul II's personal secretary for 40 years Cardinal Stanislaw Dziwisz, director of Vatican Press Office from 1984-2006 and Papal spokesman Joaquin Navarro-Valls, and Sr. Marie Simon-Pierre, the French nun whose cure from Parkinson's was the miracle that paved the way for John Paul's beatification. The second part of the evening will be a praying of the Luminous Mysteries of the Rosary.  The prayer vigil will be broadcast live, with Vatican Radio translation, at 2pm ET / 11am PT. For full broadcast details, including encore presentations and other John Paul II related programming, visit here. Join us this weekend and celebrate the life of Pope John Paul II! - CNS file photo by Arturo Mari