Saints in the City of Angels

Continuing our blogs from S+L'ers who were in Los Angeles for the Gabriel Awards, we bring you this blog from Marc Boudignon, one S+L's fantastic editors, whose credits include 'Opus Dei: Decoding God's Work,' 'Turning the Tide,' and 'Road of Hope: The Spiritual Journey of Cardinal Nguyen Van Thuan' 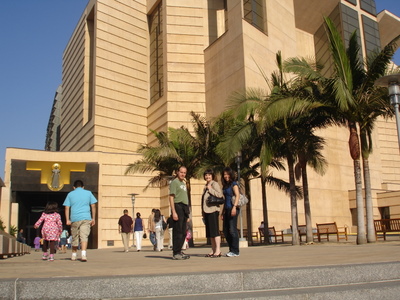 A Sunday in downtown Los Angeles is like most other days there: devoid of people. Or so I believed as our group walked the vacant streets on our way to Mass at Our Lady of the Angels Cathedral. It seemed like a ghost town, thoroughly empty, save for two nice old fellows who stopped us to ask where the Cathedral was. Gita Hosek, our station’s director of programming, displaying all the assuredness of a permanent resident, set them in the right direction. Not quite our direction, since we had decided to make a couple of detours along the way to visit One Bunker Hill and The Walt Disney Concert Hall. Gita, who had taken a walking tour the previous morning, pointed out each building’s aesthetic merits with all the zealousness of a professional tour guide. The whole group was duly impressed by her level of trivial information retention, which lead me to believe that if things had gone slightly differently for her, she would have made an excellent film editor. 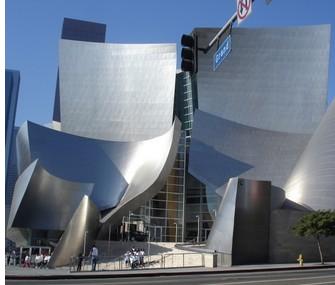 After the beautiful Gehry-designed concert hall, we continued trekking towards the Cathedral. Mass was going to begin soon. Suddenly, Mary Rose looked up and pointed to an overpass on our right. “It’s just like World Youth Day!” she exclaimed. And it was. Hundreds of people in red and yellow t-shirts happily processing – albeit in the opposite direction as we needed to go. The sight of them gave one the distinct impression that he or she had inadvertently traveled back in time and ended up in Toronto circa 2002, on Allen Road headed north towards Downsview for the vigil. We climbed some stairs and got up to the overpass. There we learned that it was a charity walk for diabetes research. Indeed, the people of the city of angels look after one another. This brought a wide smile to my face, almost as big as the smiles of the charity participants as they power-walked past us. Still, the ringing of the Cathedral bell, now-audible, beckoned. We weaved our way through the giant throng of people, drawing closer to our destination. The sound of bell got louder. The giant cross on top of the Cathedral became visible through the line of giraffe-like palm trees. A few minutes later we were standing in front of Our Lady of the Angels’ pale yellow, concrete walls. We walked around the corner and, passing through a set of gates, entered the main courtyard. It was fully alive with a vibrant community of multi-ethnic worshipers. 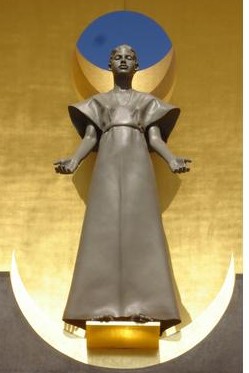 An angel hovered above the entrance. It was situated in front of a recessed portion of the edifice painted in gold leaf, adding to illusion that this heavenly being might very well fly out from the wall and descend to our earthly level. Upon entering through the main doors, many friendly people, possibly angels in mortal disguise, were there to say hello and direct us towards the pews. The interior of the church was a sight to behold. Post-modern, without a doubt. Its exposed concrete walls were adorned with many pieces of artwork – tapestries, paintings and sculptures, all of which were so beautiful that they demanded to be studied and admired for many minutes. Alas, we had to get to our seats quickly, for Mass was about to begin. 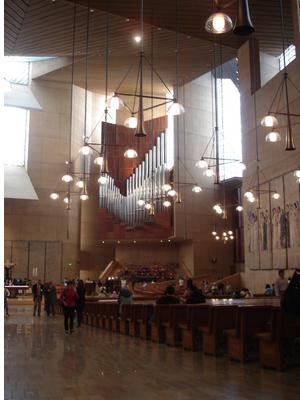 The procession moved amidst a swirl of incense. The music emanating from a large silver pipe organ, built high up into the wall, flowed through the air, whilst a choir gave glory to God in brilliant harmony. The reverence felt by the choir’s performance was made even more profound by the 25 tapestries lined along the church walls, depicting a communion of saints, all of them facing the altar – a visual representation of the cloud of witnesses who join us during every Mass via their heavenly celebration. The artistry of John Nava’s work, the sheer technical skill on display, was awe-inspiring: 135 photo-realistic interpretations of each saint and soon-to-be-recognized saint side-by-side in profile. Their faces and varied poses exuded the peace and joy each of them possessed during their lives; in effect, the happiness of Christ which each of them wishes for us right now. Their hands, old and young, weathered or soft, were clasped in prayer. Their holiness was made evident in an effort to aid our burgeoning holiness. 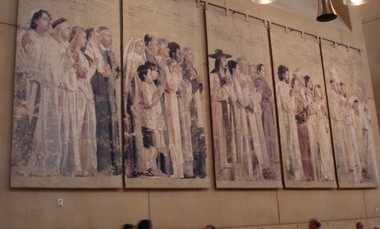 My favourite was St. Therese. Nava produced a very realistic depiction of her, which, considering photos of her do exist and thus we know what she looked like, I found it to be most appropriate and deferential. Like the other saints, her eyes were fixed on the altar; however, to me, her gaze was that much more intense, more innocent, more representative of who she was and what defined her life and mission. The other saint who I paid particular attention to was St. Mark. He is my patron name saint, of course, yet I was chuffed and also a bit unnerved to see that he looked at lot like me. Curly hair, pudgy nose, dark eyebrows. The similarities were uncanny. As I stood there, neck craned staring at his likeness after Mass was over, all I could hope is that one day I might be blessed to meet him face-to-face and ultimately see if Nava got it right! The last thing I did at the Cathedral, after taking in all the art and walking around the garden, was visit their gift shop. Now I’m not the sentimental type. Normally, I don’t go in for commemorative trinkets. Still, I knew that after seeing the tapestries and basking in their beauty, it was imperative that I get my own soft, stubby fingers on a reproduction. Basically, I wanted to ensure that I had my own copy of these saints, so that I could feel they were as close to me and my wife at home as they were in Los Angeles.