Saints and the Battle of Prayer 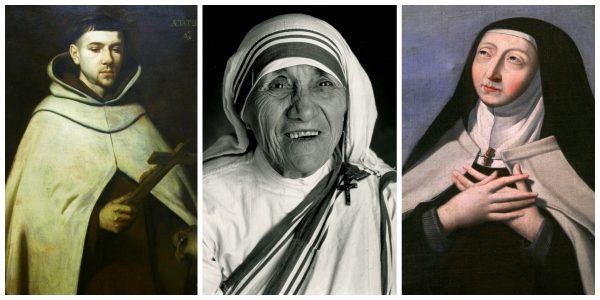 CNS Photo/Wikipedia
Saints would be the first ones to declare that prayer is a battle. But a battle with who and what? Well, they would say, with ourselves and with whatever is keeping our eyes fixed on God. “The great figures of prayer of the Old Covenant before Christ, as well as the Mother of God, the saints, and he himself, all teach us this: prayer is a battle” (CCC 2725). That’s why prayer requires a constant effort. “The ‘spiritual battle’ of the Christian’s new life is inseparable from the battle of prayer” (ibid.). The saints are our models, not only because of their exemplary lives but especially for their perseverance when things were difficult. They can inspire us when our prayer feels empty, when we stop praying, where we can’t find comfort in it, or when it is no longer a source of joy but rather sadness.

First woman Doctor of the Church. Reformer of the Carmelite Order. Founder of convents across Spain. Writer. When she joined the Carmelites at the age of 20, she entered a prestigious convent. She attended big receptions, found herself at the heart of the action but, as a consequence, her spiritual life waned. During her prayer time, she was distracted and rarely desired prayer. She waited impatiently for the end of her prayer time. She would have preferred to practice the harshest penance rather than endure prayer. She was leading, in a way, a double life, until the day she fell upon Saint Augustine’s writings, and, at the age of 40, had what she would call her second conversion. Her life changed completely at that point. Nourished by prayer she exhorted her religious sisters to the same discipline and a great fidelity to Christ. She continued to encounter challenges in prayer but no longer let’s herself be shaken by them.

“All the trials we endure cannot be compared to these interior battles… do not imagine that it consists in never thinking of anything but God, and that if your thoughts wander a little all is lost..”

Saint John of the Cross

While Saint Teresa was changing the face of religious life in Spain, Saint John of the Cross became her friend. To him, she became a kind of “spiritual mother”. Inspired by her zeal, he decided to join the Discalced Carmelites and later helped Saint Teresa open more Carmelite convents. He was eventually named Doctor of the Church. He described the experience we sometimes face when confronted with difficulties in prayer, calling it the “dark night of the soul”, which manifests itself a spiritual dryness, the feeling of being abandoned by God or sensing his absence. In reality, however, he never abandons us. On the contrary, this “night” is allowed by God so that little by little we detach ourselves from things that have been replacing Him in prayer, but also in our life, such as pleasures, appetites, activities, people, etc. These things can all be good but shouldn’t be obstacles to His grace, rather, they should go to God. Without ever forcing our freedom, God simply invites us to collaborate to the work of His grace. He is pruning - removing the weeds. Saint John shows us that we do not have to fear these moments of doubt and emptiness. It is in these instances of “purification” where we see our great need of God and where we can surrender ourselves more to His mercy.

We know her well for her immense work with the poor. But Mother Teresa of Calcutta founded the Missionaries of Charity and later felt completely abandoned by God. Her prayer, before she began her mission in India, seemed filled by God’s presence. She had visions of Jesus, spoke to him and heard his voice. She even asked him to one day know the suffering he went through on the cross and share in his solitude. This prayer is what allowed her to hear God call her to become a missionary among the marginalized of society. It was also a dangerous prayer. Upon arriving in Calcutta, everything changed. God became silent to her. She no longer had great visions and no longer felt His love and His closeness. The “silence and the emptiness is so great, that I look and do not see, - Listen and do not hear - the tongue moves but does not speak…” She experienced this for 40 years. Yet, she persevered in prayer and in her work. “I only look at Jesus suffer and keep repeating, let me share with you this pain! If my pain and suffering.. Give you a drop of consolation, my own Jesus, do with me as you wish”. What trust! And despite the darkness, people spoke of her as a joyful and radiant person. We couldn’t talk about Mother Teresa without acknowledging this very real battle she fought. What makes her a saint isn’t only her devotion to care for the poor, but also her faithfulness to her vocation and mission despite the fact she was living in a continuous “dark night of the soul”.