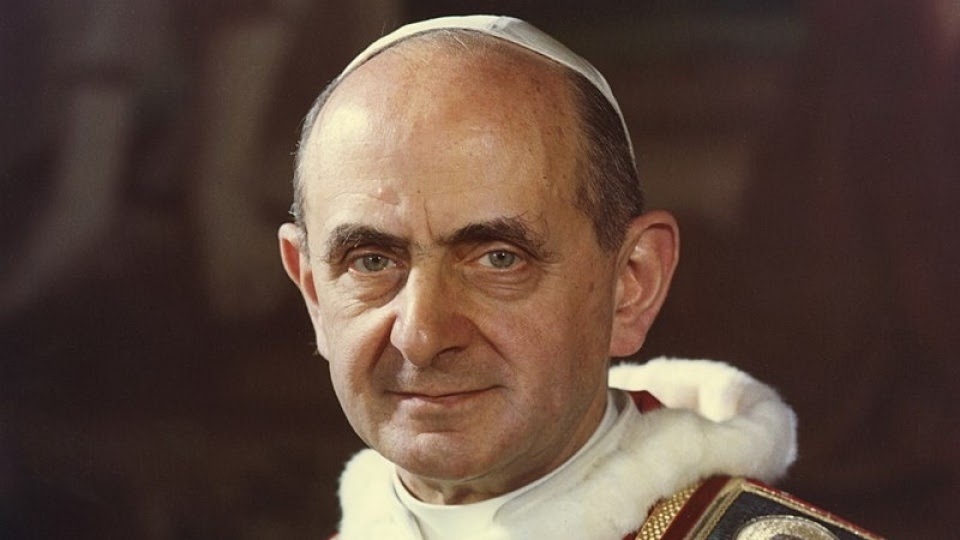 Image courtesy of Wikimedia Commons
Today is the feast of Saint Paul VI, Pope of the Roman Catholic Church from 1963 to 1978. Elected to succeed his venerated predecessor, Pope John XXIII, the first years of his pontificate were marked by the continuation and conclusion of the work of the Second Vatican Council, undoubtedly one of the most important events of the 20th century.   A major figure in the Church of his time A key figure in Vatican diplomacy and an influential member of the Roman Curia during the early years of his life, Giovanni Battista Montini chose to be known as Paul in the exercise of his pontifical office. In a sense, this name says a lot about the particular charisma of this pope who travelled more than any of his predecessors. In addition to these journeys, which helped to make the face of the Church known to the world, Pope Paul VI also contributed to the renewal of Christian life through a major liturgical reform which aimed at the purification and simplification of the Mass and the Liturgy of the Hours in particular. While the liturgical reform took place in the context of the conciliar deliberations, another major aspect of the Church's developments at that time was sexual morality and Catholic teaching on the nature of marriage, the family, and their relationship to human life.   The pope of a troubled time We are no strangers to the specific intellectual, social, and cultural context of the 1960s. The world was in turmoil, and the various Western societies were undergoing major transformations. It was in particular the time of the sexual revolution, which challenged in a sometimes radical way the traditional conception of marriage, the traditional representations of sexual difference, and the dignity of human life in all its scope. These challenges, launched in particular by the invention and popularization of the contraceptive pill, radicalized as the decade passes. During the period 1967-1968, unprecedented waves of protest against the social order broke out in the West, particularly in the United States and France. At the time, many people, even in the Church itself, believed that Christian teaching needed to be updated to respond to the novelty represented by the contraceptive pill. Some renowned theologians, such as Charles de Koninck, seriously considered the licitness of chemical contraception in the context of marriage.   An encyclical with far-reaching consequences It was in this context that Pope Paul VI confronted the issue of the regulation of birth. He took into consideration the conclusions of experts commissioned to study the subject, studied the question himself, and came to different conclusions. On July 25, 1968, the encyclical Humanae Vitae was promulgated, clarifying the Church's teaching on the sacrament of marriage and birth control. Obviously, it is widely remembered for its reaffirmation of the Church's opposition to artificial contraception and its insistence on the two constitutive and inseparable dimensions of the sexual act – union and procreation. However, Pope Paul VI's encyclical is also a text of great depth and clarity and continues to be used in the marriage preparation of many engaged couples around the world. This encyclical also contains passages that could be described as prophetic on the future of human sexuality when transformed by artificial contraception. Indeed, he wrote at the time:

“Not much experience is needed to be fully aware of human weakness and to understand that human beings – and especially the young, who are so exposed to temptation – need incentives to keep the moral law, and it is an evil thing to make it easy for them to break that law. Another effect that gives cause for alarm is that a man who grows accustomed to the use of contraceptive methods may forget the reverence due to a woman, and, disregarding her physical and emotional equilibrium, reduce her to being a mere instrument for the satisfaction of his own desires, no longer considering her as his partner whom he should surround with care and affection.”

A prophetic teaching At the time of its publication, Humanae Vitae aroused controversy and was the subject of sometimes vitriolic criticism. Many were dismayed by the continuation of a teaching that was sometimes considered retrograde. It is well known that this period was marked by a wave of deconfessionalization, while the Catholic perspective on marriage and the family was sometimes accused of patriarchy by parts of the emerging feminist movement. Yet the clarity of Pope Paul VI's vision is more obvious than ever. In a context marked by hypersexualization, exposure to pornography, and the trivialization of both contraception and abortion, sexual violence against women is more than ever the subject of justified concern, well beyond Christian circles. It seems that time has proven Paul VI right and that the intense questioning that has followed had the character of a perhaps inevitable persecution. We know that Pope Paul VI suffered greatly from the consequences of this decision guided by his conscience. Yet the timeliness of his teaching, enriched by John Paul II's catechesis on the theology of the body, continues to sustain Christian families throughout the world. In the context of a Church whose future, especially in the West, depends greatly on the strength of families – as popes have often said – it is more urgent than ever to read this encyclical and give thanks for the courage of its author. At the time of his canonization in 2018, Paul VI was the subject of a vibrant tribute by his successor Pope Francis, who speaks of him in these terms: “Even in the midst of tiredness and misunderstanding, Paul VI bore witness in a passionate way to the beauty and the joy of following Christ totally.” Let us try to follow his example through the joys and sorrows that are ours.