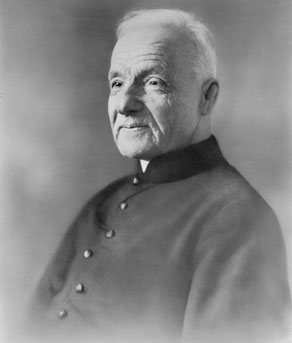 In exciting news for the Canadian Church, an essential stage in the cause of Canonization for Blessed Brother André Bessette has successfully been completed.
The Vatican’s Theological Commission for the Causes of Saints has granted a "positive and unanimous verdict" in a healing attributed to the intercession of the Miracle Worker of Mount-Royal. As reported on the October 19th edition of Zoom, the announcement came on Saturday, and reads:

According to the opinion of the theologians, the cure, examined and declared scientifically unexplainable by the Medical Commission in February 2009, is undoubtedly to be attributed to the intercession of Brother André.

The cause now proceeds to the next stage: a fifteen member group from the Ordinary Congregation of Cardinals and Bishops will study the case. Among their tasks is judging the suitability of extending devotion to Brother André throughout the Universal Church. To read the full press release from St. Joseph's Oratory regarding the Commission's declaration visit HERE. A religious of the Congregation of Holy Cross and founder of Saint Joseph’s Oratory in Montreal, Brother André died in 1937, and was beatified by Pope John Paul II on May 23, 1982. He is perhaps best known for his deep devotion to and confidence in St. Joseph -- recommending those who came to him to turn to Joseph. Blessed Brother André, pray for us!