Saint André Bessette celebrated in Rome and in Montreal 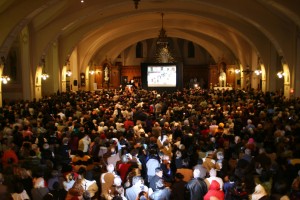 MONTREAL — Tens of thousands of pilgrims, among them 1,500 Quebecers, filled St. Peter's Square in Rome Oct. 17 for the canonization mass of Br. André, humble porter of Montreal.
At 4 a.m., Montreal time, 1,500 people squeezed into the crypt church of St. Joseph's Oratory to watch the live broadcast of the mass on a big screen. Another 500 people were directed to the basilica to listen to the audio feed of the canonization mass.
The crowd in the crypt church responded to Pope Benedict XVI's proclamation of Br. André's canonization with a spontaneous standing ovation.
Four women were also proclaimed saints: Candida Maria de Jesus Cipitra, a Spanish religious who founded the Daughters of Jesus; Mary McKillop, the first Australian saint and foundress of the Sisters of St. Joseph of the Sacred Heart; Battista Varani, an Italian nun in the Order of Saint Clare, and: Giulia Salzano, the Italian foundress of the Religious of the Sacred Heart of Jesus. A Polish priest, Stanislaw Soltis, was also canonized.
In Rome, as in Montreal, people of all ages and diverse cultures gathered to pay homage to these inspiring figures, henceforth venerated in the universal Church. Several groups of young people also led those gathered at the oratory in prayer and song during the overnight vigil.
At the end of the mass, the pope had a special address to francophone pilgrims, encouraging them to turn to Saint André Bessette: "May you, as well, overflow with charity toward your brothers and sisters who suffer ... and have a good stay in Rome."
On the eve before Br. André's canonization, thousands of Montreal pilgrims, in Rome and in Montreal, participated at prayer vigils in his honor. Sant'Andrea della Valle Basilica in Rome welcomed the Montreal delegation, where Fr. Claude Grou, c.s.c., rector of St. Joseph's Oratory, spoke about the spirituality of Br. André. As the vigil in Rome concluded, the vigil in Montreal got underway in the crypt church of the oratory. The church was filled to capacity, from the start of the 7:30 p.m. mass up until the live broadcast.
The celebrations at St. Joseph's Oratory continued throughout the day Sunday: a community breakfast for pilgrims, a high mass in the basilica, as well as organ and carillon concerts.