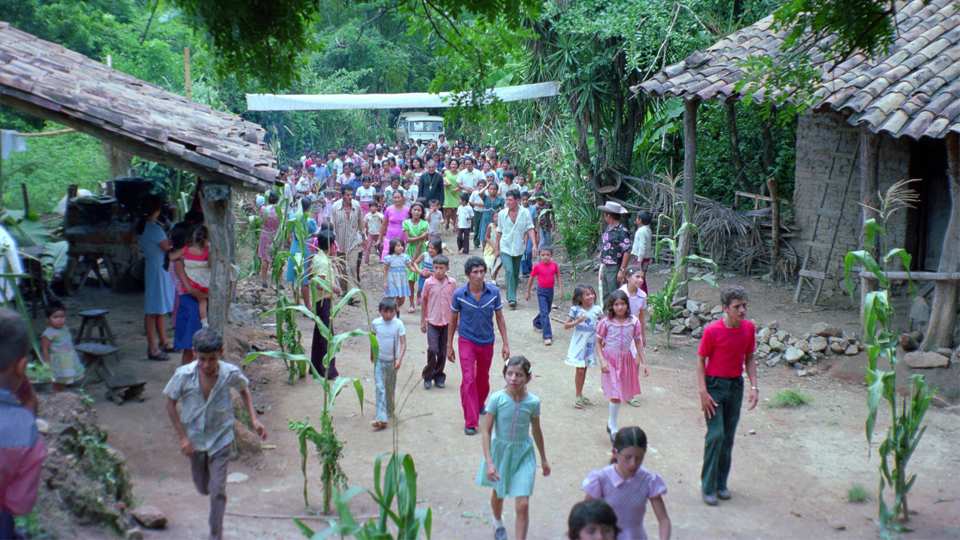 Archbishop Romero walks with a crowd as he arrives to celebrate Mass in San Antonio Los Ranchos in Chalatenango, El Salvador (1979). He was detained by soldiers for 20 minutes before being allowed to continue his pastoral visit. CNS photo/Octavio Duran

What kind of society did Blessed Oscar Romero survey as he accepted the heavy burden of leading the church of El Salvador in 1977? His archdiocese, San Salvador, was at the political epicenter of a deeply troubled nation. El Salvador in 1977 was nearing a historic crescendo of poverty and despair, built on decades of inequity and repression aimed at containing the resentment of a majority in the nation growing up impoverished, hungry and with few prospects for peaceful change. It is impossible to exaggerate the wretchedness of the poor in El Salvador at that time. As much as 75 percent of the children of El Salvador were malnourished, and infant mortality exceeded 60 percent. “It is sad to read that in El Salvador the two main causes of death are: first diarrhea, and second murder,” Blessed Oscar Romero said connecting the twin specters of poverty and violence that haunted his country. Much of the murder he deplored was political in nature, arising out of El Salvador’s complex history of economic and political repression. The suffering within Salvadoran society could be traced back to 19th century efforts to “modernize” its economic order. Communal forms of land ownership, typical in the subsistence farming communities of El Salvador’s indigenous and mestizo communities, were outlawed, beginning a process of displacement of the poor which persisted for decades. The nation’s subsistence farmers were driven from the land and into the economically perilous lives of day laborers or harvest workers as the economy was restructured in the service of a coffee trade which concentrated wealth and power into a tiny elite. This powerful group became known as “las catorce familias,” the 14 families (there were in fact many more). These conditions were challenged by a small uprising in 1932 that would eventually lay a large claim to the nation’s psyche. A group of peasants supporting Communist leader Agustin Farabundo Marti began a brief and ill-conceived rebellion that was quashed within days. The uprising, such as it was, inspired a harrowing retribution that continued over weeks of slaughter that may have claimed the lives of as many as 40,000—anyone of indigenous appearance, dress or language were targeted by the rural Guardia and bodies began filling the ditches of the nation’s roadsides. This brutal retribution came to be known as the Matanza, “the massacre.” In the nation’s historic memory, victim and victimizer of the Matanza became inverted, so that by the time Blessed Oscar Romero became archbishop many within the elite perceived the landholders and Guardia of 1932 as the trembling victims of the violence, a final, embattled rampart between “progress” in El Salvador and the murderous, anarchic fury of the peasantry. That dark memory became a template, recreated in Romero’s time in the brutal repression of social forces that at first peacefully advocated for change in El Salvador. After the Matanza the cycles of exploitation and repression continued as even more land, wealth and political power were diverted from the nation’s indigenous, who began to abandon the culture and language which marked them for violence. Many in Salvadoran society and within the church had begun to ask why this state of inequity and human ruin could be allowed to persist year upon year, decade upon decade, generation after generation. Surely Blessed Oscar Romero had seen enough repetitions of cycles of poverty in his lifetime to understand that something was broken in Salvadoran society, that something had to change. His experience as bishop in Santiago de María in 1974 and the acute pain of the loss of his friend, the assassinated Jesuit Rutilio Grande, in 1977 drew out his determination to seek that change. Oscar Romero’s brief tenure as shepherd of El Salvador can be said to mark a unique pivot point in Latin American church history. In Romero’s lifetime, with the exception of pastoral outliers it can be safely said that national churches in Latin America most often saw the best interests of the church served in an informal alliance with prevailing government powers, even when that power sometimes expressed itself in a fiercely authoritarian manner. A meeting of Latin American bishops in Medellín, Colombia, in September 1968 set in motion a process which began to create a realignment of church interests, now turning to a “preferential option for the poor.” Blessed Oscar Romero, overturning church priorities and the expectations of the powerful, was one of the first Latin American prelates to attempt to translate that lofty rhetoric into a practical social campaign of peaceful change and conversion; it only cost him his life. ____ Kevin Clarke is senior editor and chief correspondent for America Media and the author of Oscar Romero: Love Must Win Out (Liturgical Press). This post was an excerpt from Salt+Light’s Winter 2015 Magazine