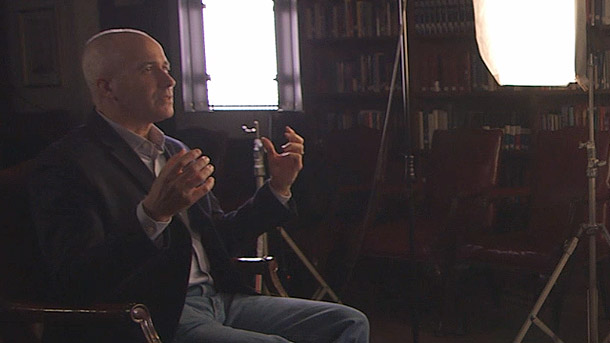 Sebastian Gomes, Salt + Light  writer/producer/director of The Francis Effect, gives us a glimpse into filming the documentary:

David Gibson is a renowned journalist, author and Catholic commentator.  As someone who knows well the history of the modern papacy and how the Vatican functions, he was a “must have” for our documentary.  I suspect that you will be impressed – as I was – by his insight, not only into the pontificate of Pope Francis, but more generally into modern Catholicism and how Pope Francis is really the embodiment of what the Council said a Christian and a bishop should be.  “Vatican II,” Gibson told me, “was doing what Pope Francis does before there was a Pope Francis!”  This 35-minute interview is a must see for anyone seeking an honest, balanced and informed take on what’s really behind the Francis effect.

Gomes:Given what Pope Francis has been doing and the overwhelmingly positive response to it, do you think the cardinals had any idea of who they were electing on March 13th? Gibson: I sometimes wonder in these past months, this past year of Francis, whether there’s any buyer’s remorse among the cardinals. Did they really know what they were getting into? And I think, obviously given the public response to Francis, they’re very pleased with what he has done, even if some are quite unsettled. But I think there is a great surprise, even among the men who elected him, of just how he has been as pope. And I think that reflects two things: one, how relatively little the cardinals themselves know about each other. As some were saying, it’s really hard to know what any bishop is like in his diocese. You only know them from these big meetings, perhaps in Rome or something like that, when they’re giving prepared talks, or when you’re meeting them over cocktails or over dinner, if you know them at all! These are 115 men from all over the world. The College of Cardinals is depicted as this, kind of “super elite club,” but in reality, they don’t always know each other as well as we think they would. So that’s a good question as to whether they really knew what they were getting in Bergoglio… The other point I’d make is that when a man becomes pope, there’s a certain liberation that takes place. Pope John Paul II frequently said that to his aides who were worried about one thing or another; he would say, “The Pope is freer than you are.” Look, you’re at the top of the pyramid, you’ve been granted this office by the Holy Spirit. There’s something liberating about that, and Pope Francis himself has talked about the freedom that comes from being the Pope, even as you’re taking on this incredible burden for the Church. He speaks so often and so affectionately of Pope John XXIII; I think Pope John XXIII is another example of that – someone who, rather surprisingly, ascended to the throne of St. Peter at a later age and also shook up the Church in a way that no one ever expected.

The Francis Effect DVD box set is now available for online and from the Salt and Light store. The 3-disc set includes the feature documentary, official trailers and over 6 hours of extended interviews.