Returning to the fold: Alicia Ambrosio 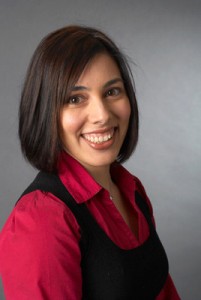 All of us at Salt + Light had a great start to our work week. An important sheep has returned to the family fold!
Alicia Ambrosio has returned to S+L's headquarters in Toronto. For the last year and a half, Ambrosio served as S+L's first Vatican correspondent in Rome. In total, she spent seven months in Rome covering the Vatican and eight months in Madrid, Spain. She was tasked with filing stories about the church in Europe and Spain in the run up to World Youth Day. When she looks back at her time spent overseas, she values what she learned from the incredibly knowledgeable experts that she met. "The Vatican is its own world in every sense," she said. "Any thing that happens outside the Vatican has some sort of effect or echo in the Vatican. There is always someone in Rome, inside or outside the Curia, who is an expert on something -- whatever it is -- and willing to talk about it. There's always a story to follow and someone fascinating to talk to." During her time in Madrid, Ambrosio felt challenged and empowered to share her story with us and everyone in the Church. "Seeing the reality of the Church in Spain was difficult," she said. "But it also led me to understand why the Vatican chose Madrid as the host city for WYD 2011. There was certainly a mission there." After being kept constantly on her feet traveling, Ambrosio is nevertheless happy to be back in the S+L office. "The energy is the same, the spirit is the same, and the mission is the same," she added. "In Europe, whenever I told people I was from Salt + Light Television, I got an enthusiastic response." For those who aren't familiar with Ambrosio's previous tenure in Canada, since 2008 she hosted Perspectives, Catholic Focus, and live coverage of Papal Masses  and Apostolic Voyages. Now that she's back, Ambrosio looks forward to sharing her love for all things Vatican, international affairs and inspirational stories. As we move forward in our mission with a sense of hope and joy, it is always good to have a familiar face back and working among us. For Alicia Ambrosio, we are most grateful. Welcome back!