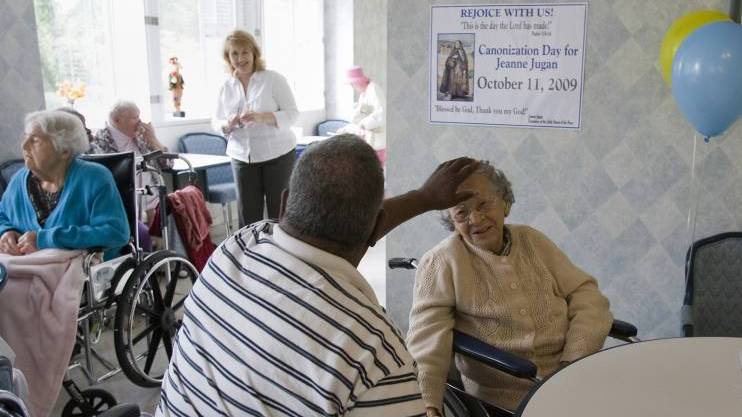 Resident Priest blesses centenarian at Little Sisters home in Washington (CNS photo/Nancy Wiechec) (Sept. 30, 2009)
We’ve spent the last month looking at what it means to have euthanasia and/or assisted suicide legal in our country (see part 4, part 3, part 2 and part 1). Let me conclude by giving you some definitions to help you have this conversation with your family and friends. The Euthanasia Prevention Coalition in Canada defines Euthanasia as: to intentionally cause death by action or omission of an action, for allegedly merciful reasons. And Assisted suicide is to knowingly provide the means for a person to kill him or herself. I’m sorry this is so long but we need to let Canadians know the dangers of having a euthanasia mentality. Once we legalize something, it becomes part of our collective belief system. I truly believe that. So, legalizing it today, means that three generations from now, it will be commonly accepted that it’s ok to resort to killing in order to deal with difficult situations. That’s the slippery slope. And there are no safeguards that will work. Once we accept that killing is OK in order to relieve suffering, killing will be the norm. Once we accept that killing is OK under certain circumstances, we’ll soon begin to think that killing is OK under ANY circumstances. And next thing you know, killing will be acceptable to rid us of other inconveniences. For more information you can contact the Euthanasia Prevention Coalition, the International Task Force on Euthanasia and Assisted Suicide or the Catholic Organization for Life and Family. Here is my Deacon-structing End of Life Issues blog series: The Law Palliative Care Life, Liberty and Security You may also be interested in watching the Every Life Matters series hosted by Archbishop Smith of Edmonton. I also produced a series of Catholic Focus episodes on end-of-life issues: The Law Human Life Matters What Does the Church Say? Ending the Pain Quality of Life And you should definitely watch our award-winning documentary, Turning the Tide. Produced in 2007, it is still very relevant today.