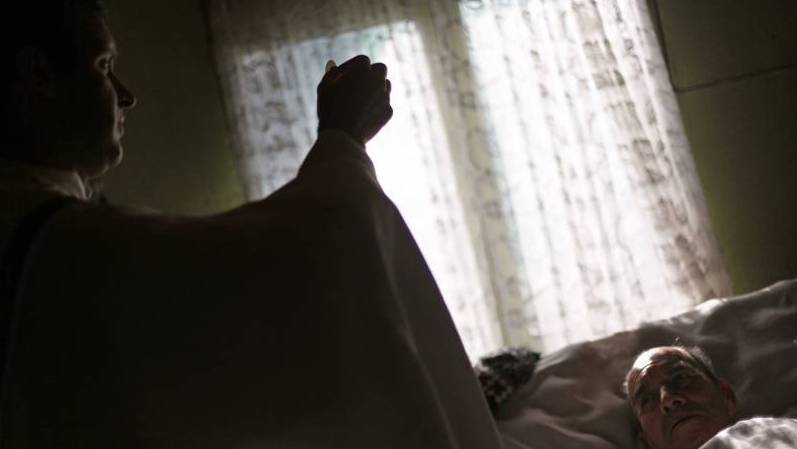 Priest offers Communion to elderly man in Chile (CNS photo/Ivan Alvarado, Reuters) (April 15, 2010)
I had been explaining some red-flags that I found in the book Final Exit by Derek Humphry (see Part 3, and also Part 2), and ended up talking about relativism: You may not want euthanasia for yourself, but don’t impose your beliefs on someone else, which is the number one flaw with this book, and with the thinking of anyone who is actually considering that euthanasia or assisted suicide are viable options. We can’t all come up with these things on our own. Your personal autonomy shouldn’t be permitted to trump the safety and well-being of society. In the words of disability-rights-activist Catherine Frazee (she used to be the chair of the Ontario Human Rights Commission), “It’s not about the particularities of a law and what it prevents and prohibits. It’s much more about the messages of the law and how those messages get translated into a social and cultural order.” (Catherine is featured in our documentary on Euthanasia, Turning the Tide, which I produced for S+L Television back in 2006.) I spoke to Derek Humphry at the Right to Die Conference in Toronto in 2006. I said to him that I found his book compelling (which is true). But I had one difficulty and that was his use of the word “dignity.” I said that when people who believe in God use the word “dignity” I understand what they mean. But when someone, who doesn’t believe in God uses that word, it’s meaningless. I don’t know what they mean. So I asked, “what do you mean when you say “dignity?” He couldn’t answer me. He said that we all have to come up with our own definitions. But I looked it up: Dig•ni•ty Pronunciation: ‘dig-n&-tE Function: noun Etymology: Middle English dignete, from Anglo-French digneté, from Latin dignitat-, dignitas, from dignus 1 : the quality or state of being worthy, honoured, or esteemed 2 a : high rank, office, or position b : a legal title of nobility or honour 3 archaic : DIGNITARY 4 : formal reserve or seriousness of manner, appearance, or language I don’t think he means “high rank, office or position” or anything about manner or language. He means “the quality or state of being worthy.” If you don’t believe in God, from where does your dignity come? Nowhere. That’s where. There is no reason to consider human life has any value whatsoever if we believe we are the result of an accidental primordial blast and if we don’t believe there is anything after this life. I’m not saying you have to believe in God or in the afterlife, but if you don’t, don’t go around pretending that human life has value and worth. I’ve said this before, without God, we would be subject to entropy, which only leads to disorder and death. As soon as you accept that there is dignity in life, you have to accept that there is dignity in all life. I’m not going to decide which life is valuable and which one isn’t. Is Teague Johnson’s life valuable? Is Tracey Latimer’s not valuable? Was Terri Schiavo’s life not valuable (her brother, Bobby Schindler is also featured in Turning the Tide)? Are we suggesting that laws can be formulated to tell us whose life is valuable and whose isn’t? I currently working on Creation, a six-part series looking at the Catholic Church’s teachings on the environment and ecology. What I’ve discovered while working on Creation is that we can’t even come to the point of believing that we must care for the environment if we don’t first treat human beings and all creation with respect and all life with the dignity that comes with being created. This leads me to my last point which has to do with the concept of quality of life. According to Humphry, self-deliverance should be an option when our quality of life has been reduced to mere existence. What are the criteria for life? Are some lives more valuable than others? If you have life, then you have quality and value. Is it right for a depressed teen-ager that believes his life has no quality to kill himself? When I worked at Covenant House-Toronto, we did everything we could to help that teen-ager. We offered counseling and help. If we tell a person who is terminally ill that it’s OK to end their life, then we are actually saying that their life is not as worthy as another life. Your quality of life does not come from what you are able to do or not do; it comes from who you are. It comes from your relationships; how you relate to others. It comes from your ability to love and be loved. Compassion means giving them the proper emotional and physical pain control and being with them, loving them, caring for them, making them feel worthy. What we need in Canada is not legalized euthanasia or assisted suicide, what we need is better palliative care. Come back next week for some final thoughts and definitions that will help you have this conversation with your family and friends.