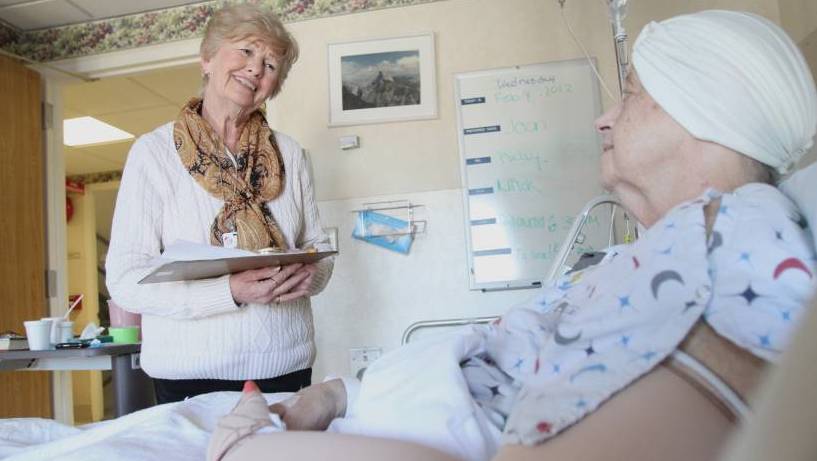 An extraordinary minister of holy Communion, visits with patient for World Day of the Sick. (CNS photo/Gregory A. Shemitz, Long Island Catholic) (Feb. 10, 2012)
In Part II, I gave a background on the author of the book Final Exit, Mr. Derek Humphry and a bit about the Right-to-Die movement. I do believe that the book is very compelling, but it contains some red flags. Here are some of them: Choice: We have been brought up to believe that freedom means choice. But freedom doesn’t mean choice. Freedom means not being imprisoned. Recently I watched a wonderful documentary, Irreplaceable, produced by Focus on the Family. In it, one of the experts explained that the three generations have been the most permissive and “free”. It is not coincidence that it is these three generations that also have been the most addicted and depressed. That’s because we think that freedom is doing whatever we want when in fact the one thing that holds us most captive are our own desires. That’s the problem with freedom and choice. And when it comes to life and death, once we accept that it’s legally OK to kill another human being, it is not a long way until we will claim that it is our basic human right to have options in how we kill each other. For those of us who believe in God, ultimately choice is about control and the minute we take control, we take control away from God. If you don’t believe in God, of course that it makes sense that you should have control over everything that you do. But I can’t even think of one aspect of my life over which I should have control. In all things, God should be in control. A Good Death: This is what Humphry says the dilemma is: “should you battle on, take the pain, endure the indignity and await the inevitable end, or should you take control of the situation and resort to some form of euthanasia which in modern language means, ‘help with a good death’?” According to Merriam/Webster, euthanasia is defined as “the act or practice of killing or permitting the death of hopelessly sick or injured individuals (as persons or domestic animals) in a relatively painless way for reasons of mercy”. I guess a “painless” way for reasons of mercy, equals a “good death”. I would claim that a good or bad death is directly related to whether you lived a good or bad life, not to the manner in which you die. Suffering: Ask yourself this question, says Humphry, “Is your God willing to accept your suicide as a justifiable escape from further terminal suffering?” I suppose a non-Christian could consider this question. But if you call yourself a follower of Jesus Christ, find a crucifix and look at it. Is God willing to accept any human-controlled escape from any suffering? (Not to mention that there is only one God, not “your” god or “my” god). Compassion: “This is compassion.” Humphry compares it all with putting an animal “out of its misery.” Someone endorsing the book is Isaac Asimov who says, “it’s cruel to allow humans to live in pain in hopelessness, in living death.” The truth is that compassion means, “to suffer with.” Killing you so you don’t have to suffer is not compassion. Freedom and autonomy: This is one of the most common arguments for euthanasia: If you don’t want it for yourself, that’s OK, but don’t impose your set of beliefs on those who would want it for themselves. But if we applied that argument to everything, what kind of world would we have? Or does it only apply if it’s doing something to your own body? Humphry says that “life is personal responsibility” and “we must decide for ourselves”. But truth is not relative. Truth is absolute. Whether killing (or suicide or self-deliverance or whatever you want to call it) is right or wrong is not relative. Either it’s wrong for everyone, no matter the circumstances, or right for everyone, no matter the circumstances. We can’t make that decision by ourselves. And you certainly can’t draw out a charter delineating when it’s ok to kill and when it isn’t. That would never work. I’ll continue in a couple of days. Again, for more resources on Euthanasia and Assisted Suicide visit our Turning the Tide page, Euthanasia Prevention Coalition, or the Catholic Organization for Life and Family site.