A couple weeks back we celebrated the feast of the Little Flower, St. Thérèse of Lisieux. Yesterday, we recognized her parents -- Louis Martin and Zélie Guérin who were beatified a year ago October 19th. 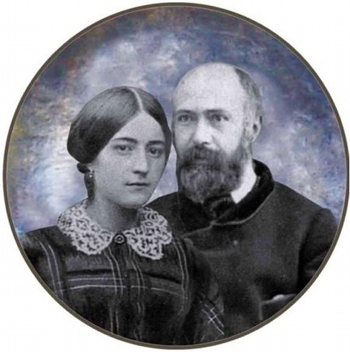 I can't help but recall Pope Benedict XVI's words to the young people on September 28th, of this year, during his visit to the Czech Republic directed towards parents and families:

Jesus constantly renews his invitation to you to be his disciples and his witnesses. Many of you he calls to marriage, and the preparation for this Sacrament constitutes a real vocational journey. Consider seriously the divine call to raise a Christian family, and let your youth be the time in which to build your future with a sense of responsibility. Society needs Christian families, saintly families!

Saintly families does not mean perfect families -- it means persevering families. The Martins had their own share of struggles. Zélie died when her children were still young, and Louis suffered an painful illness in later years, which caused Thérèse great torment. Despite these difficulties, they persevered in the Gospel -- loving, trusting, faith-filled... vocations were allowed to flourish, and encouraged. All five of the couple's children (they had nine, but four did not live past infancy) became nuns! Speaking in Pompeii on the day of the couple's beatification, which also happened to be World Mission Sunday, the Holy Father said in his Sunday Angelus:

These new Blesseds, accompanied and shared, with their prayers and their Gospel witness, the journey of their daughter, called by the Lord to consecrate herself to him without reserve within the walls of Carmel. It was there, in the concealment of the cloister, that the little St Thérèse fulfilled her vocation: "In the heart of the Church, my mother, I will be love" (Manuscripts autobiographiques, Lisieux, 1957, p. 229). In thinking of the beatification of the Martin couple, I am keen to recall another intention very dear to my heart: the family, whose role in teaching children a universal outlook that is both responsible and open to the world and its problems is fundamental, as it also is in the formation of vocations to missionary life. ... With their life as an exemplary couple they proclaimed Christ's Gospel. They lived their faith ardently and passed it on to their family and those around them. May their common prayer be a source of joy and hope for all parents and all families.

Let us turn to these great role models and pray for their intercession that all parents may make their homes domestic Churches. That parents may not be discouraged, but live a life of joyful sacrifice for each other and for their children. That homes and the family may be fertile ground for vocations to take root... in particular during this Year for Priests, that they may be the starting place for priestly vocations!  Like the Martins, may all parents be open to the possibility of their children being called to the priesthood, or the religious life, embrace it and encourage it!