As you know, I’ve been working the past few months on the documentary on Brother André, God’s Doorkeeper.  We’ve also been looking forward here at Salt + Light to Br. André’s canonization on October 17th. 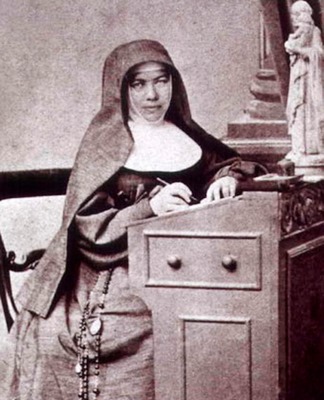 To do some justice to at least one other saint to be canonized by the Church that same day (after all, there are six in total), I must bring up Mary MacKillop of Australia. I “met” Mary MacKillop right after World Youth Day 2008 in Australia, when Kris Dmytrenko, Richard Valenti and I retraced her footsteps in Adelaide.  From that great experience in Australia and getting to know Australia’s first saint, we produced a documentary last year. In preparing for the canonization coverage on October 17th, I was looking back at my script for the documentary on Mary MacKillop.  I’d like to bring up one important thing I realized.  Both Brother André and Mary MacKillop had a great devotion to Saint Joseph!  In fact, the congregation Mary founded is the Sisters of Saint Joseph of the Sacred Heart. It was on March 19th, 1866, on the feast of St. Joseph, that Mary established her first Josephite school.  St. Joseph was Mary’s model of the humble and hidden life (even note the St. Joseph statue in the photo!).  Just like Br. André, she suffered from physical illness that she had to bear despite all the demands of her travels, letter writing and many other responsibilities. And like Br. André, Mary had a great devotion to the cross.  Br. André did build Saint Joseph’s Oratory, but at the heart of his spirituality is the love of the Crucified Christ.  When Mary made her vows, she took on the name ‘Mary of the Cross’.  She took comfort in the Cross, and there she found her peace. One of the sisters described what she remembered most from Mother Mary of the Cross:

It was her peace… a deep, endless kind of peace that came from far inside.  Oh, she was often in pain, often tired; she knew disappointments and worries in plenty… but the peace was always there.

Australia, and the rest of the Church, has much to be proud of in Mary MacKillop! Watch for a segment about Blessed Mary MacKillop on the Thursday, October 7th edition of daily Perspectives.