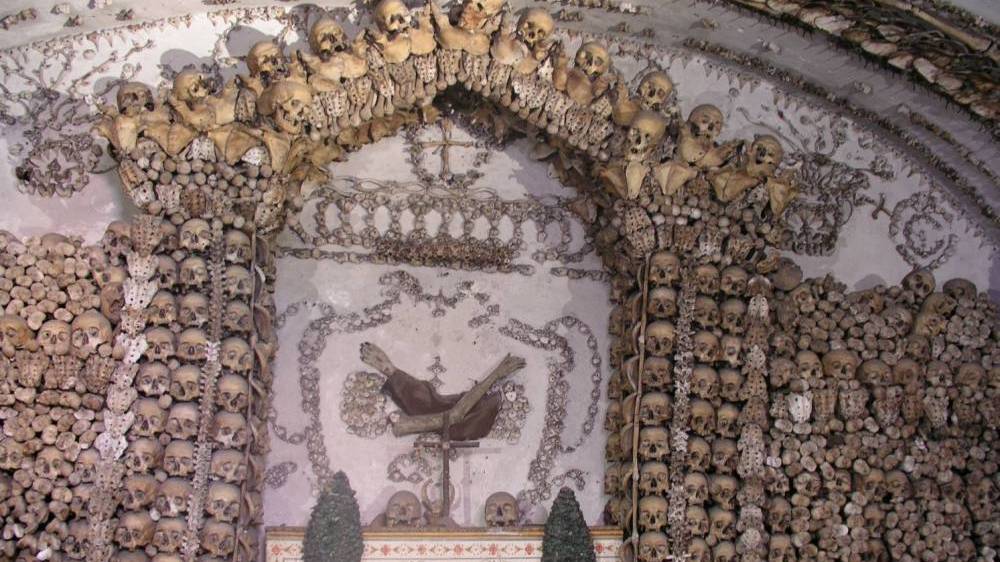 Capuccin Crypt at Santa Maria della Concezione dei Cappuccini, in Rome. Photo by Dnalor 01, CC BY-SA 3.0 <https://creativecommons.org/licenses/by-sa/3.0>, via Wikimedia Commons.
I have many friends who do not participate in Halloween activities. They refuse to do so because they believe that Halloween is a pagan holiday. Some even go as far as saying that it is a Satanic feast. I’ve always felt that there’s nothing wrong with participating in Halloween activities. After all, I don’t believe that when we dress up or go door-to-door looking for free candy, we are celebrating anything in particular. But, I too have heard about the Celtic Samhain festival of harvest and I do believe that there are crazy things that happen on Halloween night, even occult rituals. So I went to do some research. Turns out that most of our present-day Halloween traditions are deeply rooted, not just in our Catholic faith, but in specific activities that were done in order to celebrate our saints and the souls of the dead. As you know, Halloween is an abbreviation of the term "All Hallow's Eve," which means "the eve of All Saints" ("hallow" means holy). I don’t need to tell you that, since the first century, Christians have been celebrating and remembering the “spirits and souls of the just.” Originally the feast to honour Christian martyrs was on May 13th. Pope Boniface IV established it as the “Feast of All Martyrs” in 615 on the date that the Roman Pantheon was dedicated as a Church to Mary and all the martyrs. In 844 Pope Gregory IV moved the feast to November 1st.  By 714 the feast included not just all the martyrs, but all the saints as well. Pope Sixtus IV established November 1st as a holy day of obligation and gave it both a vigil (All Hallow's Eve) and an octave. Most of our present-day Halloween activities are a remnant of activities which were associated with the vigil of All Saints Day. For example, it was a practice to fast before the feast (as we still do before Lent) so people ate all the things that they were not suppose to eat on the feast day. In fact, just as with the eve of Ash Wednesday, pancakes were(and still are) a popular thing to eat. In England “soul cakes” were another food traditional for this feast. Children would go door-to-door, begging for a soul cake and promised to pray for the people’s dead relatives in exchange for the treat. It’s true that the Celtic new year harvest festival called Samhain took place around the same time of the year. I’ve read that the Celts believed that during this time of the year the wall between the living and the dead was open, allowing spirits of the dead to come into 'our world'. The way I understand it, the tradition of carving pumpkins into Jack-o’-lanterns is a left-over from this festival. This was merely of practical use, since the shell of the gourd or turnip would literally serve as a lantern. Inside the carved out pumpkin the people could also bring home an ember from the sacred bonfire. But it was also a Christian belief that during certain times of the year, the veil between the afterlife and this life was thinned. Christians believed this to happen at Christmastime, as well. And so, traditions came to include practices to ward off spirits and honour the dead. It's a belief that fire wards off evil spirits, so churches lit candles and held bonfires in cemeteries. In Spain, people visited graveyards and consecrated the graves with holy water. This is still done in many countries where people visit relatives’ graves, pray for them and even bring them special foods. There is also a very marked tradition in the Catholic Church to venerate the bodies of saints, literally. We have bones and skulls that we venerate as relics. This is not done for morbid reasons, but rather because we believe in the tangible: all God's creation is good. This may be the reason why when I typed "bone chapel" into my search engine, I found at least nine, all over Europe, including the famous Paris Catacombs and the Capuchin Crypt in Rome. Imagine a chapel where there are piles of skulls or wall-art made with human bones. Halloween or venerating our saints? 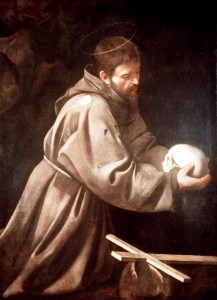 Caravaggio's "St. Francis in Prayer".
The Catholic concept of memento mori or "remembering our mortality" is as old as Christianity itself. We believe that we need to remember our death. Not because we're obsessed with the macabre, but because it is through our death that we are brought to new life. Tertullian in his Apologeticus says that sometimes, during a victory parade after a war, the triumphant general was followed by a slave who reminded him, "Respice post te! Hominem te esse memento! Memento mori!" -- "Look behind you! Remember that you are but a man! Remember that you'll die!" It doesn't take a long look through classical Christian art to find these memento mori themes. We've all seen the paintings and architecture featuring skeletons -- look for The Dance of Death by Michael Wolgemut or search "the Danse Macabre," which was also represented in music, poems and plays. And we've all seen Caravaggio's St. Francis in Prayer, where he is portrayed with a skull. St. Francis' symbol is the skull because, we are told, he often contemplated death (like Hamlet). But there are other saints, such as St. Jerome, St. Ignatius and Mary Magdalene, who are often depicted with skulls. What was not as easy to find out was where the whole dressing-up tradition came from. Do we dress like "death" to remind ourselves of our death, or to scare off unsuspecting spirits? There are so many conflicting accounts of the origins of why we dress-up for Halloween that I am to conclude that no one really knows. I did find out from various sources that the custom of going door-to-door in costumes or "guising" developed from Christian customs in Western Europe. Guising is recorded as taking place in Scotland in the late 19th century where people in disguise visit homes and are rewarded with cakes, fruit and money. In other cultures, this going door-to-door, whether in costume or not, included having to perform a song, dance or poem in order to receive the treat. Since there are other Christian feasts, which include fasting, it makes sense to me that the eves of such feasts would have been "celebrated" with wild parties, dressing up in costumes and a carnival-like atmosphere. In fact, in Panama, young people still paint their faces and dress up as "devils" on Carnival Tuesday. So, I guess, if you're going all-out feasting before the fast, why not really go all out? So where does the idea that Christians are against Halloween come from? Something else I read, which also makes sense to me, is that after the Reformation, in many places, Catholic feast days were banned. And so when All Saints goes, so does All Hallow's Eve. This is where the Christian objection to Halloween is born. When Christian Protestants come to North America and bring some of these now-secularised traditions, the licentious partying by adults is toned down and the traditions are emphasized among children. This describes Halloween in North America for most of the 20th century. It is in the latter part of the century that adults have been increasingly going to costume parties. So, that's the extent of my research. Not sure how much is true or not, but if I learned anything, it's that we shouldn't be scared of evil or of death. Evil and death exist, but Christ already triumphed over both. This Halloween, when you honour our saints and your beloved departed, remember your mortality. Whether you choose to dress up as death or a princess (or not dress up at all), remember that after the night of death, always comes the light of life.