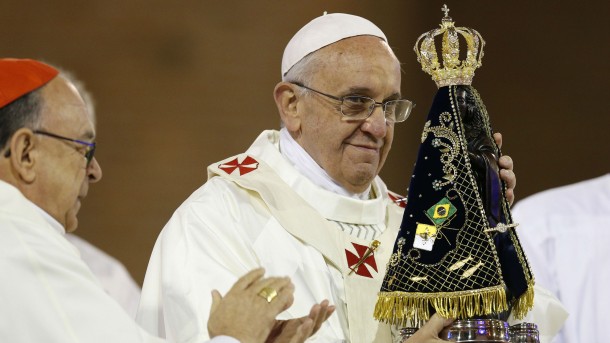 As far as I can tell in our day and age, only church councils and papal transitions can attract the kind of global attention for the Catholic Church that is both honest and positive.  While working in Rome in February and March of 2013, I was struck by this reality and by how the intrigue surrounding speculations about the future pope really brought the world together in a unique way.  And so we all remember in great detail – and will probably never forget – those first symbolic words and gestures of Pope Francis. One of those gestures was the Pope’s visit to the Basilica of Saint Mary Major in Rome, where he entrusted his pontificate to Our Lady.  In the midst of the media frenzy this visit went largely unnoticed; people were more captivated by Francis’ decision to pick up his own luggage and pay the bill at the residence where he had been staying.  The visit to the basilica was so ordinary, in the sense that it had no media shock-value, and we all watched it without thinking too much of it.  It was a simple gesture, the significance of which is only now becoming apparent. I say this because during his recent trip to Brazil Pope Francis felt it necessary to kick off the World Youth Day by visiting another Marian church: the Shrine of Our Lady of Aparecida.  This is a hugely important place for the church in Latin America (See Aparecida: a place of history and a path for the future). Having experienced the shrine myself only a few days earlier, I was curious to see how the pope would incorporate the local spiritual heritage into his larger vision for the church.  The most moving images came almost immediately, when the pope arrived at the shrine and prayed before the miraculous statue of Our Lady.  He was visibly moved by the encounter and said later that he had prayed for the success of WYD and the life of the Latin American people. 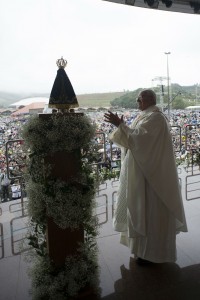 In his homily he referenced the Aparecida Document, which was the result of the 2007 meeting of CELAM, and made this observation: “It can truly be said that the Aparecida Document was born of this interplay between the labors of the Bishops and the simple faith of the pilgrims, under Mary’s maternal protection.” (Homily, July 24) Since that visit I have put much thought into this interplay between the popular piety of the people and a greater theological and pastoral vision for the future of the church.  And recently it occurred to me that perhaps Francis is so appealing because he understands both, and lives both.  When I saw him walk through the favela of Varginha and embrace the people so affectionately, I said to myself, “this man is at home here.”  And when I watched him address the leaders of CELAM and put his finger directly on the pastoral and systemic problems in the church, I said to myself, “this man is at home here, too.” Just in the past week I happened to rediscover this quote from G. K. Chesterton, one of my favorite authors, and I couldn’t help but think of Pope Francis in Aparecida:  “Mysticism keeps men sane.  As long as you have mystery you have health; when you destroy mystery you create morbidity. The ordinary man has always been sane because the ordinary man has always been a mystic. He has permitted the twilight. He has always had one foot in earth and the other in fairyland.” (Orthodoxy, Ch. 2) Pope Francis has many wonderful qualities, but perhaps the most wonderful of all is his ordinariness.  In this case what I mean by ordinariness is that he not only lives but thrives in the tension of being grounded on earth and yet always looking towards heaven.  It’s a balancing act that keeps him sane and makes him attractive to many.  His devotional life to Mary is simple, beautiful and inspiring.  At the same time he has proven himself an intellectual and pastoral heavyweight with a clear and progressive outlook. To relive World Youth Rio and to understand the pontificate of Pope Francis, we must pay close attention to his devotional life, and in particular this visit to Brazil’s National Shrine of Our Lady of Aparecida.  Each time I see the footage I feel the church getting a little bit healthier.  Pope Francis may not be a doctor, but he’s giving us the medicine we need at this important moment in history: balance, simplicity, depth, hope.  In a word, ordinariness.