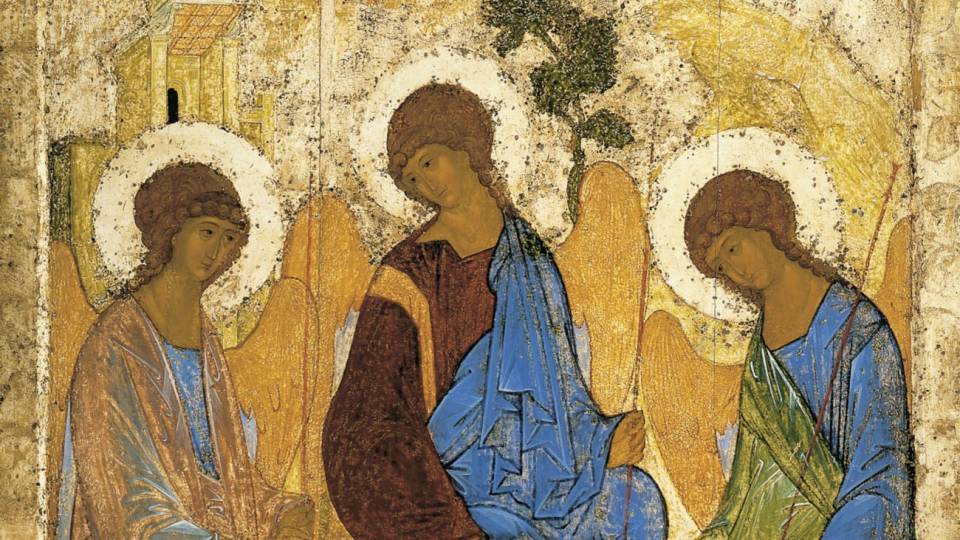 The Trinity by Andrei Rublev. Source: Wikimedia Commons.
Inspired by some of the videos by Orthodox priest, Fr. Andrew Stephen Damick (this one and this one in particular), I thought it would be interesting to look at some of the differences and similarities between Catholicism and some other major Christian groups. The two Churches which are the most closely related to the Catholic Church are the Orthodox and Anglican traditions, and while there is plenty of common ground, there are also some stark differences.

As Catholics, we are used to the idea that the pope has supreme authority in the Church. It is commonly thought that the pope reigns over the Catholic Church as if he were at the top of a pyramid scheme, but as the Second Vatican Council makes clear, the primacy of the Bishop of Rome exists in the context of his communion with the other bishops, who govern their own particular churches. The pope's power is supreme, but he is the centre of a network rather than a sole monarch. He is the head of the College of Bishops, but the collegiality of the bishops is key to the ecclesiology of the Catholic Church. Each bishop has the fullness of the sacrament of Holy Orders, and they are united through their communion with the Bishop of Rome. (For more on this topic, see Lumen Gentium Chapter III.) It is tempting to look at Churches like the Orthodox or Anglican traditions and try to find an equivalent to the pope, but both Churches explicitly reject that there is any bishop or authority figure with universal, supreme power. Catholics will often ask Anglicans, “Isn’t the Queen like your pope?” The answer to this is “no”. When Henry VIII split the Church of England from Rome in the 16h century, he took the title of “Supreme Head of the Church of England,” giving the monarch supreme authority over the English Church, referring to the historic role of the Byzantine emperor. Elizabeth I split from Rome once again after her sister’s brief reign that reunited England with the Catholic Church, but the title of the monarch in relation to the Church changed from “Supreme Head” to “Supreme Governor,” which represents a subtle difference in understanding. The monarch’s role is primarily administrative, appointing the bishops and deans of the cathedrals, but having no real doctrinal authority. The Archbishop of Canterbury is primus inter pares (“first among equals”), but decisions are made through councils and synods with the other bishops. A good summary of Church of England leadership can be read here.

Fun fact: The English monarch still uses the title “Defender of the Faith” originally given to King Henry VIII by Pope Leo X in 1521, even though the monarchs are no longer Roman Catholic.

Interestingly, the autonomous national Churches within the Anglican Communion, such as the Anglican Church of Canada or the Episcopal Church in the USA, are in communion with the Church of England, but neither the Queen nor the Archbishop of Canterbury has direct jurisdiction in the church outside England, unlike the pope, who has universal and supreme jurisdiction everywhere in the Catholic Church. In the Eastern Orthodox Church, the most senior bishop is the Archbishop of Constantinople, who has the distinction of being the “Ecumenical Patriarch”. Similar to the Archbishop of Canterbury, the Ecumenical Patriarch is the first bishop among equals and has no immediate jurisdiction outside of his own archdiocese. His main role is to preside over the Holy and Sacred Synod, which is comprised of twelve hierarchs from the whole Eastern Orthodox Church, who all serve a year-long term. Decisions are made by consensus rather than by an ultimate authority. The Ecumenical Patriarch is a figure of unity and holds a place of honour among other bishops, but the concept of a bishop with universal power over all of the self-governing national Orthodox Churches is unknown.

Orthodoxy, Catholicism, and sometimes Anglicanism are often lumped together by more mainline Protestants, and sometimes by each other. The similar aesthetics can suggest similar doctrine, but this is not always the case. The theologies of the Catholic, Orthodox, and Anglican Churches probably have more overlap with each other than they do with other Christian groups, but there are some differences. The Orthodox Churches reject certain doctrines and practices that arose in the West, such as purgatory, the Augustinian concept of “Original Sin”, the distinction between mortal and venial sins, and the major issue that keeps East and West divided, which is the supremacy and infallibility (under certain conditions) of the Bishop of Rome. Many of these issues were also targeted in the 16th-century Reformation in Europe, which divided the Church even further. Despite the common roots and shared traditions, different Christian Churches developed different understandings. The Eastern view of salvation differs significantly from the theology of the West that has been dominant for centuries, although, with the Second Vatican Council, efforts have been made to bring them closer together. This video contains an extremely interesting discussion on how Orthodox theology differs from that of the Church in the West (around the 15 minute mark). To summarize, Orthodoxy doesn’t share the view of death as a punishment for sin and of Christ’s death as an atonement. Orthodox Christians instead believe that death is a natural consequence for sin, which cuts humanity off from God who is life. The emphasis is not on the crucifixion of Christ but on his resurrection, as he accepted death as part of the human experience and rose again because he has redeemed our human nature and it is the plan for humanity to rise from the dead. Christ takes on our nature to reclaim us and bring us back to God, not to pay the price of our sin with his own life. Where Catholicism and Orthodoxy have some common ground is the belief in the free gift of God’s grace, which is not earned but by cooperating with it we come closer to God. Because Anglicanism allows for a broad spectrum of theological views, it can be hard to pin down big issues. Generally, it shares in the Western Catholic tradition, but in many ways it sides with Orthodoxy on issues such as rejecting concepts like purgatory and papal supremacy. In what can be both a strength and a weakness, Anglicanism has a flexible openness to diverse theological perspectives and dialogue with other traditions. Anglicans are united more in their “common prayer” than by uniform doctrine.

There is hope that differences can be reconciled and that these three major traditions can come to a mutual understanding. The existence of the Eastern Rites and the Anglican Ordinariates in the Catholic Church, Western Rite Orthodoxy which is informed by Tridentine Catholic liturgy and the Anglican Book of Common Prayer, and the influence of Catholicism and Orthodoxy on Anglicanism, suggests that their differences are primarily about where they view authority. Liturgical differences are evidently reconcilable when under the same Church structure, and theological dialogue has brought relations between many Churches closer together, especially in the world after Vatican II, but the one stumbling block appears to be disputes about authority and the exercise of power. Differences of theological perspectives are not necessarily barriers to unity, and in recent decades, all sides have made great strides towards ecumenical dialogue and respect. Centuries of separation has led to divergent interpretations of Christian tradition, but it is clear that there is more that unites these branches of Christianity than divides us, and hopefully, with time, divisions can be healed.