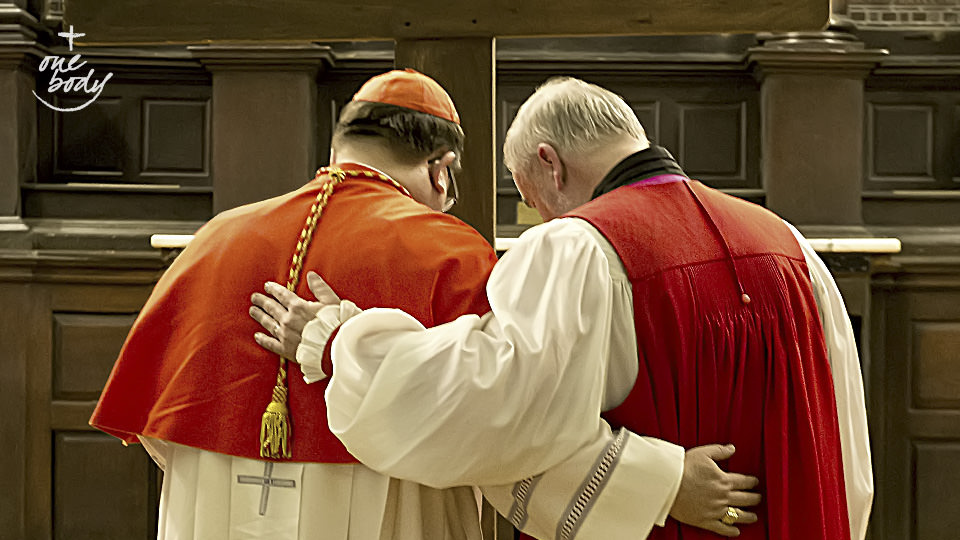 Cardinal Gérald Cyprien Lacroix, Archbishop of Quebec and Primate of Canada, prays in front of a cross with Bishop Dennis Drainville, Anglican Bishop of the Diocese of Quebec (2009-2017), on Good Friday 2014. Photo credit: Fonds-Daniel Abel, used with permission

On November 16, 2021, the Canadian Anglican–Roman Catholic Dialogue (ARC–Canada) marks its 50th anniversary. In an increasingly divided world where relationships are more often defined by conflict than cooperation, this is indeed an occasion to celebrate! An ongoing dialogue where words are used not to dominate or control but to seek understanding is a critical counter-cultural witness in today’s world. In addition to celebration, a 50th anniversary is an invitation to reflect on the past and to consider what may be learned for the future. My involvement with the Canadian ARC Dialogue began in 1984 when I joined the Canadian Conference of Catholic Bishops (CCCB) staff. From then until 2002, Anglican colleagues – first Brian Prideaux, then Alyson Barnett Cowan – and I shared staffing responsibilities for the dialogue. We became good friends, counting on one another’s strengths to support the dialogue – minute taking, compiling reports, and editing texts for publication in Canada or forwarding to the International Commission (ARCIC). In 2016, I was invited by the CCCB to return to the dialogue, this time as a member. Coming back to the dialogue after a 14-year absence, it is interesting to see what has changed and what has remained the same. In response to financial constraints faced by the sponsoring churches, one change is a smaller number of members and fewer meetings. Despite clear financial challenges, the dialogue continues as a witness both to the churches’ commitment to one another and their recognition of the value of the dialogue process. So, after almost 25 years of involvement with ARC-Canada, what do I see? This may seem a straightforward and quite obvious observation, but I don’t think it’s possible to overstate the importance of respectful relationships and open listening. Dialogue can be complex, involving not just an exchange of ideas but a sense of deeply held convictions and an awakening of memories of past hurts. Trust in each dialogue partner’s integrity, fidelity, and good will is an essential component of any dialogue. In such a context, it’s not surprising for very different individuals – like Anglican bishop John Baycroft and Dominican priest Jean Marie Tillard – to form strong and lasting friendships, which was often evident through their interactions during the course of a multi-day meeting. Over the years, ARC–Canada has consistently been committed to exploring the theological bases for union between our two churches, to receiving agreed statements from the international dialogue (ARCIC), promoting their reception here in Canada, and reflecting on ways in which the Canadian context might enhance the worldwide dialogue. This commitment has meant developing theological responses to the various statements issued by ARCIC and publishing educational resources for use in local theological schools or parish settings. The work of the Canadian dialogue has often benefited from the fact that one or two of its members also served on the international dialogue. Reports from John Baycroft and Jean Marie Tillard, for example, not only kept ARC–Canada aware of the ARCIC agenda but also provided opportunities to contribute to it. A couple of examples can illustrate this consistency in theological responses to ARCIC statements. In 1991, the dialogue published its Reflections on the Experience of Women’s Ministries. Developed in response to current difficulties faced by the dialogue due to the admission of women to the ministerial priesthood in some provinces of the Anglican Communion, the authors of this agreed statement saw their reflections on the growing affirmation of women’s ministries in Canada as suggesting a way forward. The text begins with a survey of the various ministries of women that have evolved in the two churches in Canada. Not surprisingly, since Anglicans and Roman Catholics in Canada live out their faith in the same social and cultural context, survey results find the ministries exercised by women in the two communions – except for the question of priestly ordination – are remarkably similar. With this large area of common understanding and practice, it takes up the challenge of evaluating reasons for disagreement over the ordination of women. Here, a review of the present state of theological reflection on the role of women in the church again finds a great deal of similarity in Anglican and Roman Catholic positions. Next, the dialogue offers a proposal: “that the issue of women’s ordination be approached as a disputed question about the enculturation of the Gospel” and suggests that ARCIC II consider the question from this perspective. It highlights the need for discernment, inviting “Anglicans and Roman Catholics throughout the world to join Canadian Anglicans and Roman Catholics in this process of discernment about the meaning of these developments in Canadian culture. We suspect that they have significance for the Church throughout the world; but we must discover together, under the guidance of the Holy Spirit, what exactly that significance is.” A similar approach is evident in ARC–Canada’s response to the international dialogue’s most recent agreed statement, Walking Together on the Way: Learning to be the Church—Local, Regional, Universal (WTW). Still in the process of development, the Canadian response begins with a review of the history of division between the two churches in Canada, acknowledging as well its impact on the Indigenous communities in this country. Following the lead of ARCIC III’s choice of the methodology of receptive ecumenism, the response describes local, regional, and universal “instruments of communion” currently in operation in the two churches, highlighting similarities and differences. It then seeks:

“to encourage ecumenical gift exchange between the Anglican and Roman Catholic traditions as they exist here. This is undertaken in part to enhance ecumenical understanding and reception of WTW locally. We also hope that seeing the approach of the international text applied to a national context will be of benefit to ARCIC III in assessing the effectiveness of the document on a level closer to the ground.”

The dialogue has also been consistent in its commitment to preparing educational resources to promote local reception of ARCIC texts. In 1984, for example, ARC–Canada published Building Bridges: A Study Guide to the Final Report of ARCIC I. This was accompanied by a series of workshops in both academic and parish settings. In 1998, efforts to promote ARCIC II’s Life in Christ: Morals, Communion and the Church gave rise to an agreed statement entitled On the Way Together: A People Created for the Common Good. This was accompanied by a Study Guide with ten sessions exploring principles in our common heritage that shape Anglican and Roman Catholic participation in Canadian society and the human community at large. Most recently, the Canadian dialogue has prepared a Reader’s Guide to ARCIC III’s Walking Together on the Way statement. This is accompanied by an Implementation Guide with several suggestions for workshop possibilities. In addition, ARC–Canada members have offered workshops in various settings to introduce the ARCIC III text. An electronic publication of New Stories to Tell: Living Ecumenism Today in 2019 takes a more contemporary narrative approach. It seeks to highlight themes reflected in ARCIC II’s five agreed statements through a series of stories rooted in Anglican and Roman Catholic connections and partnerships in the real world, demonstrating that ecumenical dialogue is more than a verbal exercise; it has the potential to transform our churches. Looking to the future, I hope the Canadian dialogue will “keep on, keeping on”. The two-pronged approach that has marked the past 50 years should be continued, with the possibility of employing ever more contemporary tools, like the Did You Ever Wonder common witness project, to enhance local reception of international dialogue documents. The search for Christian unity is a lengthy process that requires much patience. Ecumenism is a commitment to take real action that will lead to changed perceptions and attitudes. It is a commitment to the future. Sr. Dr. Donna Geernaert, SC, served for 18 years in promoting ecumenical and interfaith relations for the Canadian Conference of Catholic Bishops. She has been a staff member, consultant, and member of numerous multilateral and bilateral theological dialogues in Canada as well as internationally.