Reflections from the March for Life 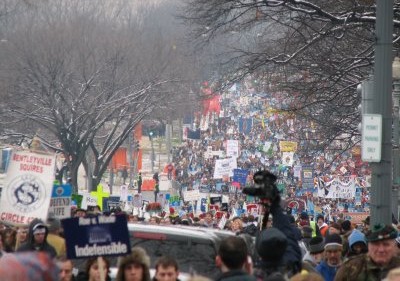 I am in Washington this week filming a future epsiode for the investigative series Eye on the Church (which returns to Salt + Light Television this spring). My visit just happened to coincide with two epic events: Tuesday's inauguration of President Barack Obama and Thursday's March for Life. One brought 1.8 million people chanting "Yes We Can" to the National Mall, celebrating a triumphant moment for race relations in the US. The other event brought a little over 100,000 people to the streets of Washington DC, emboldened by the cry "Yes we will." Early Thursday Morning I began my day by attending Mass at St. Peter's Church where I was struck by a powerful homily delivered by Bishop Martin Holley of Washington, who happens to be African American. His homily was dedicated to the scourge of abortion on the African American family. The numbers he shared with us were shocking. Since abortion was legalized in the United States in 1973 more than 13 million African American children have been aborted. That is one third of the current African American population in the US. Three out of five black pregnancies end in abortion leading Holley to speculate that his people could soon become an endangered species. Holley also attacked abortuaries and Planned Parenthood for strategically setting up shop in poor black neighborhoods, exploiting the insufficient family support and epidemic poverty that drives many young black women to terminate their pregnancies. Indeed, Planned Parenthood, America's largest abortion provider, was founded by eugenicist Margaret Sanger, who explicitly pursued the subjugation of blacks and other poor ethnic groups. Which leads me to my first hand observation from the US Capital. On Tuesday I was awestruck by the sight of hundreds of thousands of African Americans who descended on Washington DC to witness history. I applaud the significance of the moment and praise unreservedly the healing of past hurts and injustices. However, there is a grave injustice occurring in the African American community that Obama's current administration has no plan to address. That is the killing en masse of black children and the auto-destruction of the African American family. One can only hope and pray that the remarkably gifted Obama, who cites Abraham Lincoln as his chief political role model, will one day awaken and realize that those most devoted to his presidency are the very one's most damaged by the unrestricted abortion he promotes. And that just as Lincoln moved from a policy of containment of slavery to emancipation he too can transform himslef into the agent of "change" unborn children in America so desperately need.