Red Wednesday 2022: Blood red, to remember the love and gift of the martyrs 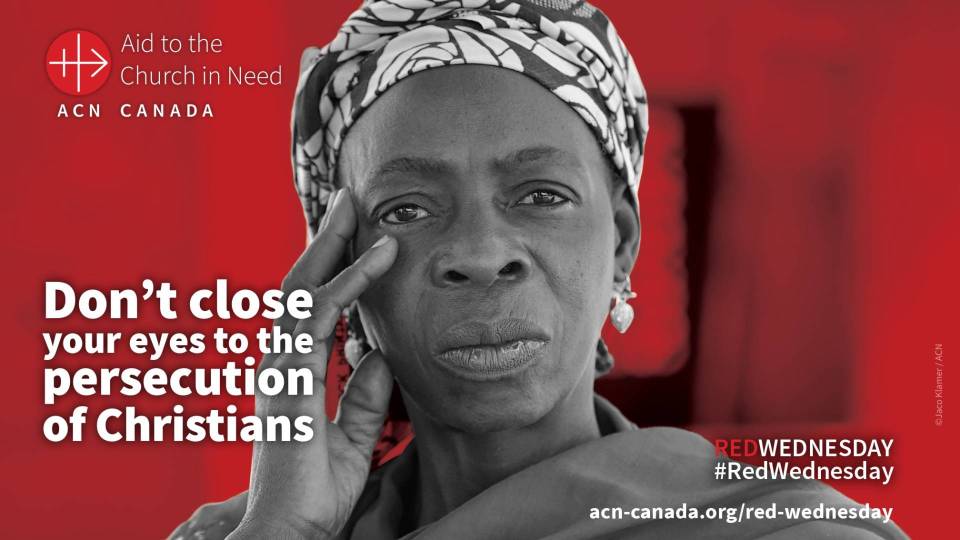 On November 16, 2022, The Canadian office of Aid to the Church in Need (ACN) invites everyone to show solidarity with persecuted Christians around the world by participating in Red Wednesday. This global initiative will take place in 16 countries, including Australia, Germany, France, and the United Kingdom. In Montreal, a Mass will be celebrated at 7:30 p.m. at Mary Queen of the World Cathedral, whereas in Toronto, an ecumenical vigil will begin at 7 p.m. at St. Michael’s Cathedral Basilica. They will be presided over by Auxiliary Bishop Alain Faubert from the Diocese of Montreal and Cardinal Thomas Collins, Archbishop of Toronto, respectively. Salt + Light TV will be airing both events. Further details are available at: https://acn-canada.org/red-wednesday/ “In the Christian tradition, red symbolizes the blood of martyrs, the blood of women and men who have died in the name of their faith,” explains Marie-Claude Lalonde, national director of ACN Canada. “The illumination of buildings in red reminds us of the gift and love shown by the martyrs, the blood they shed because they refused to respond to violence with violence. It can be a nun who defends the landless people of the Amazon, like Dorothy Stang, a naturalized Brazilian nun who was murdered on February 12, 2005, by pistoleiros hired by large landowners in the state of Pará. It can be a Christian, layperson or other, who is targeted simply because they are a Christian. Unfortunately, hatred—and the violence that accompanies it—is on the rise all over the world, even in Canada.” Indeed, the Uniform Crime Reporting Survey (UCR), a survey designed to produce an indicator on the incidence of crime in Canadian society and its characteristics, revealed that from 2020 to 2021, religion-based hate crimes had increased by 67%, including a 260% increase for Catholics alone. “Of course, this is concerning, and we will be monitoring the situation closely. In general, the Canadian public is either indifferent or uncomfortable with religion. We know, however, that people care about the respect of basic human rights, including religious freedom,” says Lalonde, adding: “This is enshrined in the Canadian Charter of Rights and Freedoms, in section 2.” In addition to the cathedrals-basilicas of Montreal and Toronto, whose building facades have been lit for this event since 2018, that of Saint-Michel’s in Sherbrooke, Quebec will be illuminated for the first time from Wednesday, November 16 to Sunday, November 20. Moreover, two of Canada's six recognized national shrines will be illuminated for a second year in a row: the facades of the Shrine of Our Lady of the Cape and Saint Joseph’s Oratory will be lit in red for two days (November 15 and 16). Various activities—prayer vigils, masses, and moments of awareness—have also been announced throughout Canada, including in Calgary, Thetford Mines, Chicoutimi, Verdun, and Quebec City, to name a few. “We ask those who are planning an activity of their own to contact Valérie Vulcain at vv@acn-canada.org so that we can help them publicize their event.” On November 16, let us stand in solidarity with persecuted Christians around the world! https://acn-canada.org/red-wednesday/.