Reclaiming poetry for the Christian imagination: Anthony Esolen’s The Hundredfold 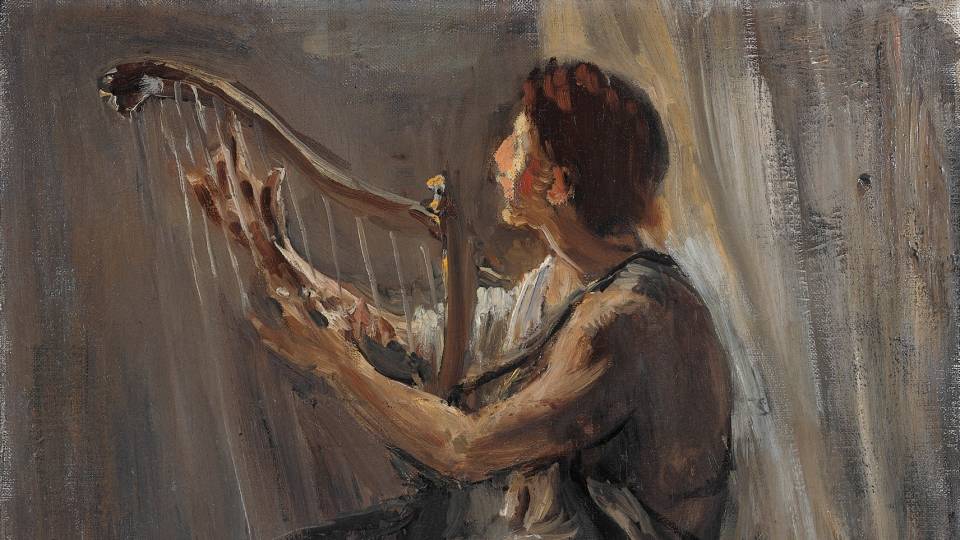 Detail of David by Jozef Israëls (Source: Wikimedia Commons). This painting is used in the cover art for Esolen's new book of poetry published by Ignatius Press.
I’ll let you in on a little secret. Wichita, Kansas, is a great place to live if you’re a Catholic. Not only is there a vibrant Catholic community with a strong sense of identity and numerous opportunities for spiritual enrichment, but it also seems to be a good place to encounter Catholic “names” (George Weigel, Fr. Jacques Philippe, Simcha Fisher, and Matt Maher being just a few who visited in the short time I was there). It was during my time in Wichita that I happened to attend a Catholic culture conference at which Anthony Esolen was the keynote speaker. (Here’s another secret: If you have a chance to hear him speak, make sure you stay for the Q&A. The man is hilarious.) Esolen is a professor of literature, specializing in works of the Renaissance. He spoke about the pursuit of truth, goodness, and beauty, which should be inherent in our lives as human beings but especially as Catholics, and he also spoke about the failures in modern American culture and especially in the American education system that have resulted in the rejection, broadly speaking, of that fundamentally human pursuit. I felt I had found a kindred spirit (albeit one with greater intelligence, experience, and authority). He spoke with such clarity and insight about issues which concern me greatly: mainly the pursuit of truth, beauty, and goodness through art and education – something which should be a part of everyone’s life and not just an increasingly few intellectuals. The man stands for truth, and he does his best to speak it. And because he comes from a certain perspective born of his own life experiences and I come from mine, I don’t agree with everything he says, but even (or perhaps I should say, especially) in those moments, I believe he is a man worth listening to. And so, not long ago, when my boss offered me a book which had recently arrived at our office, I took one look at the name Anthony Esolen and grabbed it. I was surprised by what I found. I was expecting something along the lines of the talks he’d given in Wichita and his books, Ten Ways to Destroy the Imagination of Your Child and Out of the Ashes: Rebuilding American Culture. What I found instead was a book of poetry.

The Hundredfold, or don’t skip the intro

Read it first or read it last, but whatever you do, don’t just skip over the introduction. It helps to make sense of the poetry and to understand what he is trying to achieve with it. Not that the poetry cannot stand on its own, but the introduction really is a part of the whole rather than an unnecessary, indulgent appendage. The first few pages stand as a lament for the loss of poetry in our culture. Although I believe he is speaking specifically about American culture, this assessment is probably broadly applicable across Western society, though various countries or segments of a population may be in a greater or lesser state of decline and decay. He singles out free verse (a sort of poetry with no metre or rhyme scheme) as a particularly insidious culprit, removing from poetry its inherent beauty so that after a few generations, we have become inured to the lie that poetry is only for a few artsy or intellectual types. (A similar phenomenon has happened, too, in music and visual art.) Esolen’s desire is to release poetry from this prison of the imagination and return it to the common people, where it belongs. In a couple of longer sections, he explains the basics of poetry: the essential concepts of metre and rhyme and how they work specifically in English – because each language has its own natural rhythm. I see this section as connected to the earlier lament because the fact of the matter is, if we had an appreciation for poetry, we should not need any explanation of how it works and how to read it. In the final segments of the introduction, Esolen explains the work before us: the various types of poems and hymns and how they fit together as a whole. This, too, I notice with a sinking feeling, would probably have been unnecessary a hundred years ago. Before he sends us forth to read his poems (or his one long poem in 100 parts), he leaves us with one final thought, which is also a call to arms. He explains why he wrote this book:

I did not do so because I had nothing else to do. I did it because it was a thing I could do, and a thing I believed somebody or other had to do, as a first salvo in the Christian reclamation of the land of imagination and song. I am not so much showing what I can do as showing what can be done, and what might be done by people with greater skill than mine. I want not emulators and imitators but people who will charge past me in blood and triumph.

I’m no poetry expert. Far from it. So I cannot judge Esolen’s poetry for its technical ability or depth or place within the grand scheme of this enduring human tradition. But I can tell you what I like. The advantage Esolen has with me is that his poetry is somewhat “old-fashioned”. I like old-fashioned poetry. I like poetry with metre – a clear rhythm that I can follow. I’m happy with or without a rhyme scheme. And I need poetry to have some immediately obvious meaning. It’s not that poetry shouldn’t make you think. It should. But sometimes I don’t want to. I like poetry that is seductive in that way – it lures you in by its beautiful sound and perhaps somewhat superficial, easily grasped meaning. But as you read it again and again – because poetry should be that enjoyable – you start to uncover the deeper meaning behind the words (that smarter people probably figured out much sooner). Each of Esolen’s poems falls into one of three categories. There are 12 dramatic poems or “monologues”, 21 hymns, and 67 lyric poems, which are meditations on Scripture. I like the “monologues” least. There’s something a little too obvious about them. Or maybe they just don’t speak to me (pun intended). However, I did enjoy the letter from Pontius Pilate to the Emperor Claudius. Pilate’s complaining, prevaricating, slyly grovelling tone had me chuckling throughout its 233 lines. Next, the lyric poems. These make up most of the hundred poems, and their great advantage is that they are short. If Esolen is to be believed (and I do believe him), most of the American reading public, and his intended audience, have little experience with poetry beyond having the pleasure sucked out of it in high school English class. So I think it is safe to assume that most readers will have at least as little patience as I have when reading poetry. I tend to troll from page to page waiting for a particular composition to stop me in my tracks rather than immediately giving each and every poem my full attention. Overall, I found the lyric poems had plenty of depth and not a little skill. But to me they lacked music. However, there were a few that did stop me in my tracks so that I read them through more than once just to revel in the sweet sounds. I like the hymns best, possibly more for the very idea than for the compositions themselves. He has written poems to be sung and indicates the traditional tune he has intended for each. And why not? I enjoyed searching out the tunes on YouTube and reading in time to the music. I also imagined which ones I would enjoy belting out most from my pew. And that is perhaps why I liked them best – the very sense that here was a truly public form of poetry that we could really use.

So would I recommend others to read The Hundredfold?

I would. There’s no need to read it doggedly from cover to cover like I did, but then again I was reading it for work. It’s a good book to have around and to dip into from time to time. Even if you only find one or two that you really like and keep coming back to, then it’s worth it. I think the most attractive aspect of Esolen’s poetry is its accessibility. If we’re aiming at enjoying poetry, it helps if we can grasp without too much struggle at least vaguely what a poem is getting at. But I would say that for me the greatest value in this work is its moderate (in my opinion) artistic value. Esolen is not another Tennyson or Frost or Wordsworth, nor does he pretend to be. He is someone who can, so he does. And I in turn feel inspired to follow where he leads. Why shouldn’t we have new devotional poetry by Catholic writers and more of it? And why shouldn’t we have new, thoughtful and thought-provoking hymns to sing alongside Charles Wesley and Marty Haugen? The beauty of standard tunes is that you don’t need to be a musician in order to write new hymns – and make them singable. And if I have at all understood his purpose in writing this book, this is exactly the result he was aiming at. Multiplied a hundredfold. Kudos to you, Mr. Esolen. The Hundredfold: Songs for the Lord by Anthony Esolen was published by Ignatius Press in 2019.