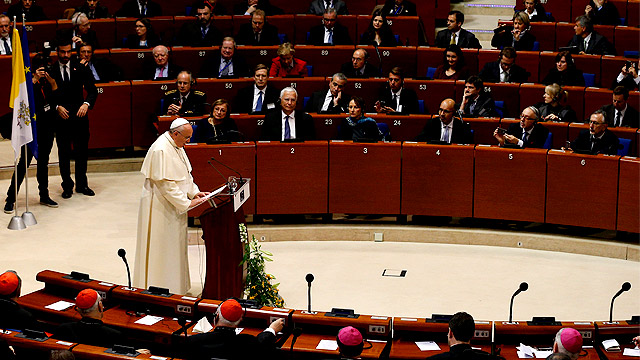 The man who designed the European Union flag, Arsène Heitz, was inspired by scripture and the image of Mary on the Miraculous Medal. While he never hid the fact that the flag he designed is “Our Lady’s flag”, the European Union itself has offered different explanations for the evocative design. The flag, and the EU explanation of it, highlights modern Europe’s relationship with its Christian roots. During his day long visit to the European Parliament and Council of Europe, Pope Francis focused heavily on the Christian values upon which the European community found common ground and founded a union meant to ensure peace on the continent. Join us Wednesday, November 26 at 1:30 pm ET in English and 5:00 pm ET in French for a recap of Pope Francis’ visit to Strasbourg and his address to the European Parliament and the Council of Europe. Watch online.