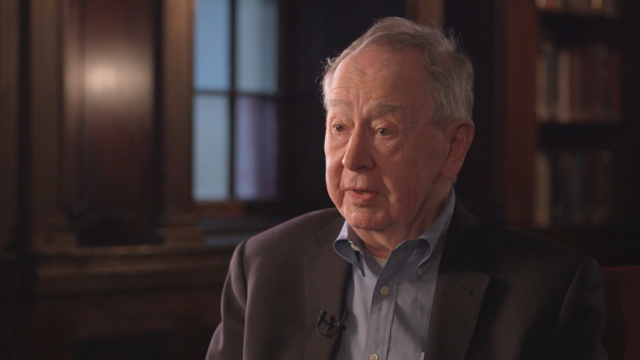 Point of View: Interpreting the Francis Effect is an S+L series that goes deeper into the important questions surrounding the person and pontificate of Pope Francis. The series consists of a selection of the full interviews from S+L’s original documentary The Francis Effect.
Tonight: Fr. John O’Malley, SJ
In his opening address at the Second Vatican Council, Pope John XXIII spoke those inspired words concerning the value of a proper understanding of history:

“In the daily exercise of our pastoral office, we sometimes have to listen, much to our regret, to voices of persons who, though burning with zeal, are not endowed with too much sense of discretion or measure. In these modern times they can see nothing but prevarication and ruin. They say that our era, in comparison with past eras, is getting worse, and they behave as though they had learned nothing from history, which is, none the less, the teacher of life. They behave as though at the time of former Councils everything was a full triumph for the Christian idea and life and for proper religious liberty. We feel we must disagree with those prophets of gloom, who are always forecasting disaster, as though the end of the world were at hand.”

Pope John was not advocating indifference among the bishops to the serious problems of the modern world in the 1960’s, but was criticizing the point of view of some Catholics who dismissed church history and consequently suffered from a fearful and defensive shortsightedness, unable to read the signs of the times. Pope John felt that a proper understanding of church history and tradition should liberate Catholics to do new and daring things in order to effectively preach the Gospel in the modern world.
According to the renowned Jesuit historian Fr. John O’Malley, a widespread ignorance of history runs through the Catholic Church and prevents us from seeing the bigger picture. Our interview on the historical significance of the pontificate of Pope Francis delves into precisely this issue. “How is it,” Fr. O’Malley asks in disbelief, “that the church of the great tradition doesn’t know its own tradition?” It is essentially the same question posed by Pope John five decades ago.
Church history, which Fr. O’Malley says has been unjustly relegated to an auxiliary science, is the key to understanding the shifts taking place inside the Catholic Church under Pope Francis. Our patrimony—the “great tradition”—is an inexhaustible gift for the Church in the 21st century. Spark your imagination and broaden your perspective through this penetrating conversation with one of the church’s leading historians, airing for the first time on S+L.
Watch Point of View: Interpreting the Francis Effect Airs Wednesday, June 3, 2015 9:00 pm ET / 6:00 pm PT Only on Salt and Light Television (check schedule for repeats)