Reaching for the Modern Periphery 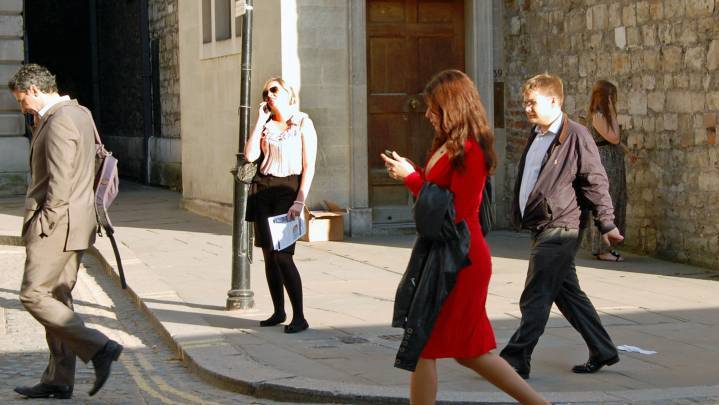 Source: Wikimedia Commons/Duncan Harris
by Alex MacDonald Since his election, Pope Francis has not tired of emphasizing the missionary mandate of the Church. He has added a unique focus to this traditional mandate — to reach for the peripheries of society. Often the Pope speaks of the mission to the periphery as directed particularly to refugees, migrants, the poor, the unemployed, and the elderly. In a general sense, Francis is encouraging the Church, but also humanity as a whole, to turn with compassion to the forgotten of society. For many this will sound like the usual appeal to perform works of mercy, such as feeding the hungry, clothing the naked, and visiting the sick – but there endures a vast yet subtle periphery which is close at hand in our modern world and which often goes unnoticed or ignored. The subtle periphery of the modern world is made up of those we have marginalized. It is composed of the people in our lives with whom we have decided we cannot connect or befriend because of differing moral, religious, or ideological worldviews. These are the people we have cast aside thinking there is no common ground to be found, no connection possible, and we have thus relegated them to the periphery of our modern – often First World – lives. This disconnectedness is compounded by the nature of modern social life. In our digitally connected world, those physically closest to use are ironically often those farthest from us relationally. Not only do we often concede the impossibility of friendships with those who differ from us, but the individualistic and isolationist shape of our social lives makes it difficult to truly connect with others. To embrace the periphery, we must befriend and serve those around us. This requires courageously breaking down not only personal but social barriers as well. As Christians, we have to bring our joy and hope into the public square and be people who reach out to the isolated and peripheral persons in our paradoxically interconnected society. This comes down to striving individually to live our faith in the midst of each day – an effort that will inevitably bring more joy and peace to the settings which we frequent, deepen existing relationships, and render us more open to new and possibly unexpected friendships. In this way, reaching for the modern periphery is not simply an act of charity. It is the apostolate of friendship. Going out to the peripheries in our life is to reject self-absorption and a personal life that is isolated and comfortable. A natural openness to others and to dialogue is one way to display the attractiveness of Christian social values. While there is great value in personal conviction, it can become a barrier when individuals defensively close themselves and form an echo chamber. We cannot be people who perform monologues. We have to enter into dialogue with others, especially those socially and ideologically farthest from us. On several occasions Pope Francis has expressed his desire for the Church to be like a field hospital, in the thick of battle, tending to all. This is one way Francis has metaphorically drawn the image of the Church orientating herself to the periphery. In that metaphor, we are the workers in the field hospital that go out daily to heal the wounds of our neighbours, society, and culture. To reach for the subtle periphery in your life is to reject righteous isolationism in a time when drastically different ideas of the human person and the human community conflict, and ideological partisanship becomes more entrenched. It requires the determination to look beyond an often dreary reality and nonetheless seek to connect and serve your fellow man no matter how far his worldview is from yours. Embracing your own periphery is to reject the tyranny of division and seek common ground and understanding through friendship and good will.

Alex MacDonald hails from the Greater Toronto Area. Alex studied Political Science and History at McGill University, focusing on international relations and American social history. He is an avid follower of Canadian and world politics and a student of Catholic social thought.