Proclaiming Jesus is Lord in April's edition of Lectio Divina 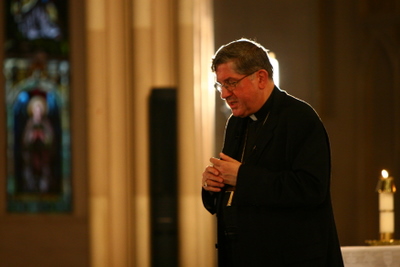 In the April edition of Lectio Divina with Archbishop Thomas Collins: A Year with St. Paul, Archbishop Collins brings up the often forgotten practice of bowing one's head at the name of Jesus. He framed it in the context of the Hail Mary -- that you would know when someone was praying the Rosary, because every so often they would dip their heads (".... blessed is the fruit of thy womb Jesus..."). The bow of one's head was a way to show honour to the name of Jesus, a way to acknowledge that this is a sacred name, one deserving of our respect, one which should not be carelessly used. He brought this up as he reflected on St. Paul’s Letter to the Phillippians (2:1-18). It's the wonderful passage, appropriate to this Easter season, that proclaims Jesus as Lord:

Therefore God also highly exalted him and gave him the name that is above every name, so that at the name of Jesus every knee should bend, in heaven and on earth and under the earth, and every tongue should confess that Jesus Christ is Lord, to the glory of God the Father.

Though Archbishop Collins spent probably less than a minute talking about the bow of one's head, it was a nice reminder of a small way that we can honour and love our Lord -- who gave so much for us. You can watch Archbishop Collins entire Lectio Divina on Phillippians 2:1-18 this Sunday, April 26th at 9pm ET, or on Wednesday, April 29th at 8pm ET in Lectio Divina with Archbishop Thomas Collins: A Year with St. Paul, only on Salt + Light Television.