Prestigious Award Given to Salt + Light Television Second Year in a Row! 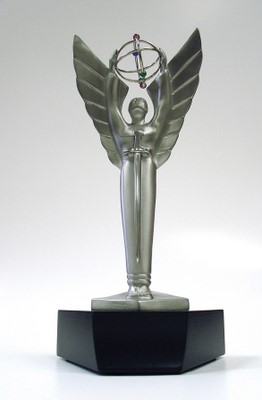 Not once but twice! Canada's Catholic Television Network, Salt + Light Television, will once again be celebrated in October as it receives its second Gabriel as "Television Station of the Year" from the Catholic Academy for Communications Arts Professionals. The news was made public on July 20, 2009 by the Academy in Dayton, Ohio. With only six years of broadcasting quality programs nationwide and around the world, this will be Salt + Light's second Gabriel! The Gabriel Award for "Station of the Year" is an outstanding achievement, and in addition one of Salt + Light's recent documentaries A Hand of Peace: Pope Pius XII and the Holocaust, produced by influential producer and commentator, David Naglieri, has been awarded a certificate of merit. The Gabriel Awards were established in 1965, and are issued by the Catholic Academy for Communications Arts Professionals, an international Vatican-approved organization for communication, "to recognize outstanding artistic achievement in a television or radio program or series which entertains and enriches with a true vision of humanity and a true vision or life." Fr. Thomas Rosica, CSB, CEO of Salt + Light Television, who is also a Consultor to the Pontifical Council for Social Communications at the Vatican, is delighted to receive this award for the second time. "These prestigious Gabriel awards pay tribute to the hard work of everyone at Salt + Light Television, to our many donors and benefactors across Canada, and to the Supreme Council of the Knights of Columbus who have been so faithfully and strongly supporting us since our beginnings in 2003. The Gabriel Award recognizes our efforts in the New Evangelization that are at the core of our mission." After learning about the certificate of merit, David Naglieri said, "I am thrilled to learn of this recognition for our film on Pius XII. Just like the Gabriel Award, this film that portrays Pius XII's efforts to save the Jews during the Nazi Holocaust, honours truth and justice. We feel strongly that the film lives up to those worthy principles." In addition to the team at the broadcast centre in Toronto, Ontario, Salt + Light Television's success in its Evangelization efforts is a direct result of the support of its viewers. Now broadcasting to more than two million households throughout every province across Canada, and around the world through live streaming, Salt + Light Television uses the powerful media of television to bring hope and inspiration, education and entertainment to our viewers. Salt + Light Television was founded only six years ago at the conclusion of World Youth Day 2002 in Canada. Since its conception Salt + Light has produced many original television series and award-winning documentaries that have been distributed around the world. The Gabriel Awards will be presented at a ceremony in October, 2009 in Los Angeles, California. For more on Hand of Peace and to view the trailer visit: handofpeace.saltandlighttv.com