Prayer Meeting for Peace: Address of His Holiness Pope Francis 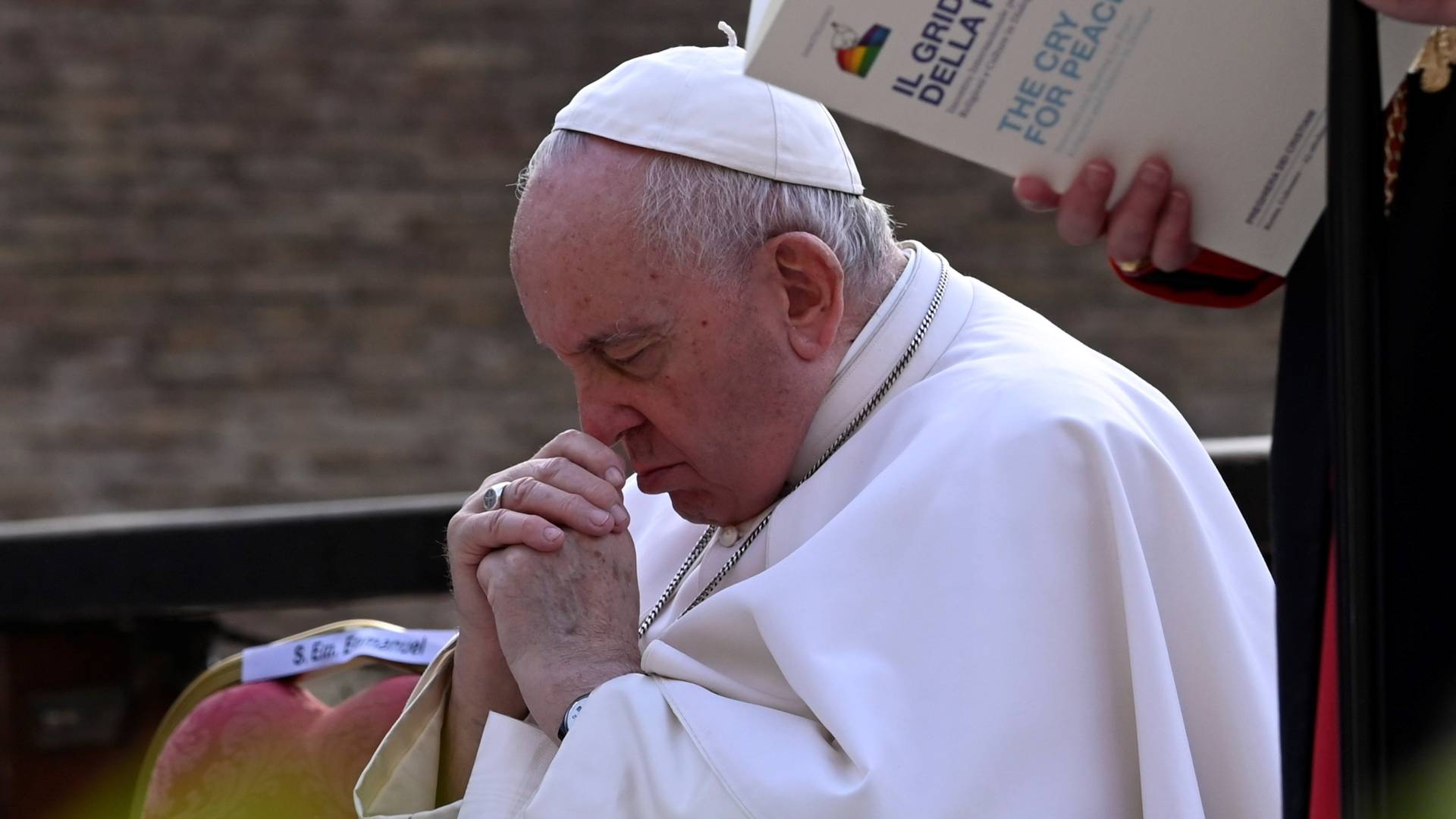 Pope Francis observes a moment of silence during an interreligious meeting for peace at Rome's Colosseum Oct. 25, 2022. (CNS photo/Vatican Media)

At the Colosseum in Rome on October 25, Pope Francis addressed an interreligious prayer meeting for peace. At a time when "the use of atomic weapons is threatened outright," even in Europe, the Holy Father's prayer for peace was "a heartfelt plea" and an appeal to the progress in "fraternal relations between religions."

Prayer Meeting for Peace: Address of His Holiness Pope Francis

Distinguished Leaders of the Christian Churches and of World Religions, Brothers and Sisters, Honourable Civil Authorities, I thank each of you who are taking part in this meeting of prayer for peace. In a special way, I thank the Christian leaders and those of other religions, who have joined us in the same spirit of fraternity that inspired the first historic convocation willed by Saint John Paul II in Assisi, thirty-six years ago. This year our prayer has become a heartfelt plea, because today peace has been gravely violated, assaulted and trampled upon, and this in Europe, on the very continent that in the last century endured the horrors of two world wars – and we are experiencing a third. Sadly, since then, wars have continued to cause bloodshed and to impoverish the earth. Yet the situation that we are presently experiencing is particularly dramatic. That is why we have raised our prayer to God, who always hears the anguished plea of his sons and daughters. Hear us, Lord! Peace is at the heart of the religions, their sacred writings and their teaching. This evening, amid the silence of prayer, we have heard that plea for peace: a peace suppressed in so many areas of the world, violated by all too many acts of violence, and denied even to children and the elderly, who have not been spared the bitter sufferings of war. That plea for peace is often stifled, not only by hostile rhetoric but also by indifference. It is reduced to silence by hatred, which spreads as the fighting continues. Yet the plea for peace cannot be suppressed: it rises from the hearts of mothers; it is deeply etched on the faces of refugees, displaced families, the wounded and the dying. And this silent plea rises up to heaven. It has no magic formulas for ending conflict, but it does have the sacred right to implore peace in the name of all those who suffer, and it deserves to be heard. It rightfully summons everyone, beginning with government leaders, to take time and listen, seriously and respectfully. That plea for peace expresses the pain and the horror of war, which is the mother of all poverty. “Every war leaves our world worse than it was before. War is a failure of politics and of humanity, a shameful capitulation, a stinging defeat before the forces of evil” (Fratelli Tutti, 261). These convictions are the fruit of the painful lessons of the twentieth century, and sadly, once more, this part of the twenty-first. Today, in fact, something we dreaded and hoped never to hear of again is threatened outright: the use of atomic weapons, which even after Hiroshima and Nagasaki continued wrongly to be produced and tested. In this bleak scenario, where, sad to say, the plans of potent world leaders make no allowance for the just aspirations of peoples, God’s plan for our salvation, which is “a plan for peace and not for evil” (cf. Jer 29:11), never changes. Here the voice of the voiceless finds a hearing; here the hope of the poor and the powerless is firmly established: in God, whose name is Peace. Peace is God’s gift, and we have implored that gift from him. Yet peace must be embraced and nurtured by us men and women, especially by those of us who are believers. Let us not be infected by the perverse rationale of war; let us not fall into the trap of hatred for the enemy. Let us once more put peace at the heart of our vision for the future, as the primary goal of our personal, social and political activity at every level. Let us defuse conflicts by the weapon of dialogue. 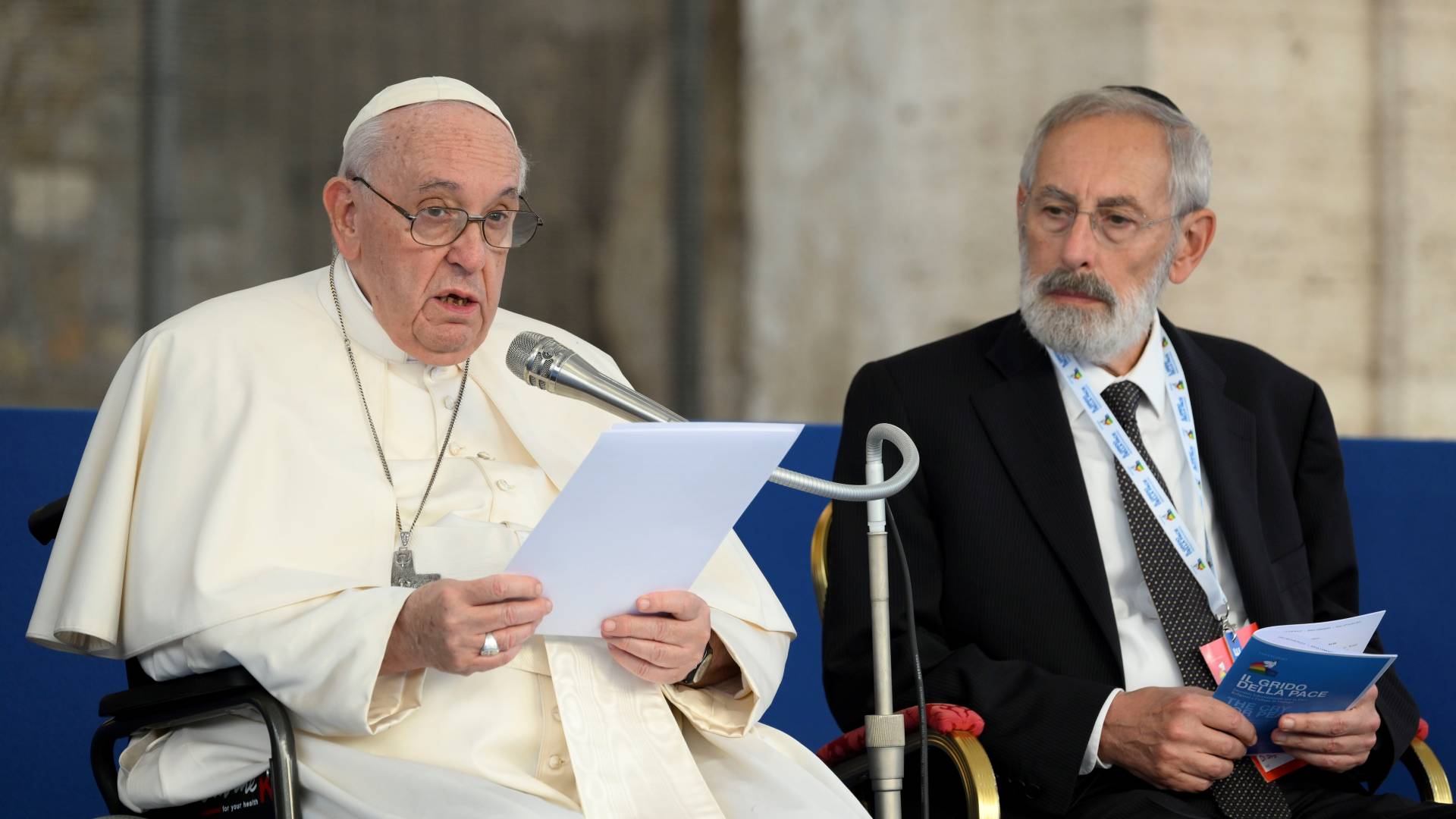 Pope Francis reads his speech at an interreligious meeting for peace at Rome's Colosseum Oct. 25, 2022, as Rabbi Riccardo Di Segni, chief rabbi of Rome, looks on. (CNS photo/Vatican Media)
In October 1962, amid a grave international crisis, when military confrontation and nuclear holocaust seemed imminent, Saint John XXIII made this appeal: “We plead with all government leaders not to remain deaf to this cry of humanity. Let them do everything in their power to safeguard peace. They will thus spare the world the horrors of a war, the terrible consequences of which cannot be foreseen.... Promoting, fostering, and accepting dialogue at all levels and in all times is a rule of wisdom and prudence that attracts the blessing of heaven and earth” (Radio Message, 25 October 1962). Sixty years later, these words still impress us by their timeliness. I make them my own. We are not “neutral, but allied for peace”, and for that reason “we invoke the ius pacis as the right of all to settle conflicts without violence” (Meeting with Students and Representatives of the Academic World, Bologna, 1 October 2017). In recent years, fraternal relations between religions have taken decisive steps forward: “Sister religions to help peoples be brothers and sisters living in peace” (Meeting of Religions for Peace, October 7, 2021). More and more, we feel that we are all brothers and sisters! A year ago, gathered here before the Colosseum, we launched an appeal that is all the more timely today: “Religions cannot be used for war. Only peace is holy and no one is to use the name of God to bless terror and violence. If you see wars around you, do not resign yourselves! The peoples desire peace” (ibid.). This is what we will strive to do ever better each day. Let us never grow resigned to war; let us cultivate seeds of reconciliation. Today let us raise to heaven our plea for peace, again in the words of Saint John XXIII: “May all peoples come together as brothers and sisters, and may the peace they so deeply desire ever flourish and reign in their midst” (Pacem in Terris, 171). So be it, with God’s grace and the good will of the men and women whom he loves. Text courtesy of Libreria Editrice Vaticana