Will Christians once again celebrate Easter on the same date? 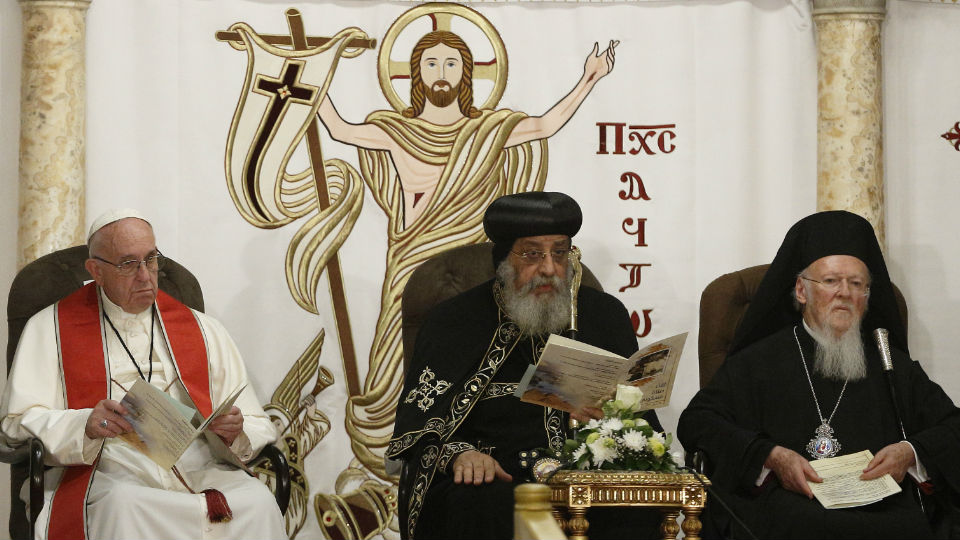 (CNS photo/Paul Haring: Pope Francis (left), Coptic Orthodox Pope Tawadros II (center), Ecumenical Patriarch Bartholomew (right), spiritual head of the Eastern Orthodox churches, attend an ecumenical prayer service at the Church of St. Peter in Cairo, as an image of the risen Lord stands behind them. April 28, 2017.)
With a providential twist in the ecumenical narrative, Pope Francis's visit to Egypt April 28-29 fell during the Easter season of both the Roman Catholic and Orthodox churches. That's not always the case. Last year, 2016, Easter was celebrated in the Catholic Church on March 27, while the Orthodox churches celebrated Easter a staggering five weeks later on May 1. That's because of a reform of the calendar under Pope Gregory XIII in 1582. Until that time, Easter had been celebrated on the first Sunday after the first full moon after the spring equinox, according to the Julian Calendar and confirmed by the Council of Nicaea in 325. Gregory corrected a slight error in that ancient calculation, and eventually the "Gregorian Calendar," as it came to be known, was adopted over time by most countries for practical purposes, like trade. But the date of Easter, was another matter. The Orthodox churches have retained the Julian calculation, and that accounts for the discrepancy in dates for our celebrations of Easter. But this year Pope Francis and his Catholic flock, and Pope Tawadros II and his Coptic Orthodox flock, celebrated Easter on the same date, April 16. How providential it is the two met and prayed together in Cairo during Francis's highly anticipated visit to Egypt a few weeks later. Pope Tawadros has been the most vocal church leader in promoting the effort to find a common date for Easter. In May 2014, he sent a letter to then Apostolic Nuncio to Egypt, Archbishop Jean-Paul Aimé Gobel, proposing to Francis and the Catholic Church that a serious effort be undertaken to find a common date. During Francis's visit to Egypt, the two popes signed a Common Declaration exhorting their churches to, "deepen our shared roots in the one apostolic faith by praying together and by seeking common translations of the Lord’s Prayer and a common date for the celebration of Easter." As the calendars stand right now, the two churches will not celebrate Easter on the same date again until 2034. That is, unless the two popes choose to push the agenda. Tawadros and Francis—and Ecumenical Patriarch Bartholomew of Constantinople as well—have shown themselves to be ecumenical pro-activists. They want to move forward, whether their churches, historians and theologians are ready or not. An unexpected and ground-breaking statement in that same Common Declaration reads: "Today we, Pope Francis and Pope Tawadros II, in order to please the heart of the Lord Jesus, as well as that of our sons and daughters in the faith, mutually declare that we, with one mind and heart, will seek sincerely not to repeat the baptism that has been administered in either of our Churches for any person who wishes to join the other." This statement has provoked much conversation about our churches' understanding of each others' baptism. But it should not come as a surprise, since Francis and Tawadros are seeking to break new ground, as I said. Finding a common date for Easter will be more complex than making a common declaration. The churches of the East who follow the Julian calendar are, for the most part, independent. They do not have a "pope" figure like the Catholic Church who can make a sweeping decision across the board. But the independence of the Eastern churches can also be a blessing in this way: the Coptic Orthodox Church in Egypt, for example, is totally free to agree on a common date for Easter with the Catholic Church and put it into practice. No other Orthodox church could prevent that. And, with leaders like Francis and Tawadros, who clearly see eye-to-eye on this issue, Catholics and Orthodox Copts may be celebrating Easter on the same day again long before 2034.