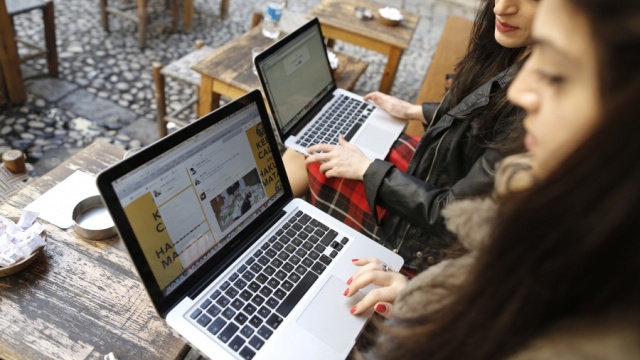 (Photo: CNS)
Pope Francis says a lot of surprising and challenging things.  Often I read something he’s said or written and say to myself, “I can’t believe he said that.”  Still—as with anything else—we can become desensitized to his spontaneity and candour, and we risk glossing over some of his highly consequential statements.
One recent statement that we should not gloss over is his message for World Communications Day 2016 entitled, Communication and Mercy: A Fruitful Encounter. In it, he reflects on the urgent need for more charitable and merciful communication between individuals, with a clear focus on the world of social media and communications.  The message prompted atypical news coverage from the digital world: “Apparently Pope Francis Can’t Stand Internet Trolls Either,” read the headline at ThinkProgress. Or, my personal favorite from RawStory, “Pope Francis opens a can of whoop a** on hateful internet trolls—and it’s beautiful.”
With this message Pope Francis did what he so often does; he struck a nerve with a wide audience by using simple, relatable and deeply Christian language. The message applies to all types of communication certainly, but since many people today live “online”, here are 7 direct quotes that should prompt all of us to reflect on how we communicate using social media:

1) “What we say and how we say it, our every word and gesture, ought to express God’s compassion, tenderness and forgiveness for all.”

Here the Pope makes an important observation that how we say something is as important as what we say. It’s easy to forget that and it’s often difficult to try to rephrase something we want to say in light of another person, let alone with “compassion, tenderness and forgiveness”.  Perhaps for every tweet, post or comment we should send another one explicitly expressing compassion, tenderness or forgiveness.

2) “Our words and actions should be such as to help us all escape the vicious circles of condemnation and vengeance which continue to ensnare individuals and nations, encouraging expressions of hatred.”

Here Pope Francis flips the script on us and reminds us that how we communicate has a deep impact on us too. The purpose of communicating is, as he says, to create “closeness”, which is a reciprocal phenomenon. We can ask ourselves, how do my communications on social media affect my own attitudes toward others and my relationships with them?

3) “The words of Christians ought to be a constant encouragement to communion and, even in those cases where they must firmly condemn evil, they should never try to rupture relationships and communication.”

Pope Francis, the “sinner whom the Lord has looked upon,” never forgets that being Christian starts with conversion of self. No statement condemning vicious and vengeful comments online would be complete without a direct challenge to his fellow Christians, who are often the most viscous and vengeful trolls. But the deeper challenge here is that condemning evil—something the Church does very often—shouldn’t destroy relationships or communication. The logical conclusion here is analogous to that old saying our mothers used, “If you can’t say something nice, don’t say it.” When there are human beings involved, jumping to condemn all kinds of evil through objective, categorical statements may not be the most merciful method of communication and relationship building.

4) “The truth is ultimately Christ himself, whose gentle mercy is the yardstick for measuring the way we proclaim the truth and condemn injustice.”

It’s often said in church circles that the greatest act of mercy is to tell the truth. Therefore, if someone is committing an unjust act, I am being merciful by categorically condemning it. That may or may not be the best approach, depending on the situation. The most important variable, according to Pope Francis, is how Jesus would communicate in a particular situation. This requires a deep familiarity with the Jesus of the Gospels whose “gentle mercy” time and time again overwhelms both sinner and judge alike, to the point that the person committing an unjust act truly encounters God’s forgiveness and the person standing in judgement feels it necessary to get rid of Jesus. The question becomes, not whether or not we're proclaiming the truth, but whether or not we’re proclaiming the truth as Jesus did.

5) “Harsh and moralistic words and actions risk further alienating those whom we wish to lead to conversion and freedom, reinforcing their sense of rejection and defensiveness.”

This statement builds on #4 by taking us a step further. Speaking the truth in a harsh and moralistic way is no guarantee that a person will be converted or freed. In fact, it will most likely have the opposite effect and kill any chance of further communication. Just because we may be right about something doesn’t give us the right to communicate it if a person will feel rejected because of it. Pope Francis’ whole pontificate is the preeminent example in our world today of communicating truth without using harsh or moralistic words.

6) “I would like to encourage everyone to see society not as a forum where strangers compete and try to come out on top, but above all as a home or a family, where the door is always open and where everyone feels welcome.”

Communications technology has turned the world into a global society. We may be more connected, but the online world doesn’t particularly feel like a family. Often we come across comments or tweets that are so negative or competitive and we wonder why someone would say something online that they would never say to a person in real life. Again Pope Francis takes us a step further. When we communicate online, we shouldn’t ask ourselves, “would you say this to the person’s face?” but, “would you say this to your brother’s or sister’s face?” The analogy of the family for society as a whole is a bold one. The key here is unconditional inclusivity. I’m not sure how we can put that into practice, especially because, sadly, even many families fall short of this lofty goal. Pope Francis certainly does swing for the fences, but then again so did Jesus when he proclaimed the Kingdom of God was at hand.

7) “Listening is much more than simply hearing… Listening means paying attention, wanting to understand, to value, to respect and to ponder what the other person says.”

Well... then I’m not a very good listener. Imagine… listening to someone entails a desire to be closer to them in respect and understanding. We tend to think that communication is all about what we say, but there are two sides to every coin. How often do we really try to listen to another person’s views and try to understand where they are coming from? There are so many news outlets and blogs that adhere to one particular ideology and exclude any kind of constructive critique or dialogue with differing views. It may be worth putting some time in to read one of those blogs that we typically ignore for ideological reasons, and share something from it on our own social media platforms that is respectful and constructive. In other words, listen, and show it.
On Further Reflection In the complex world of the 21st century there are more questions than answers. The challenge for the Church is to find new and effective ways of bringing the Gospel message into the conversation.  For her part, the Church can act as a much needed voice for dialogue, reason and charity. On Further Reflection invites readers to go beyond the headlines to see the deeper realities affecting the church and society.  Sebastian Gomes is a producer and host at Salt+Light TV.