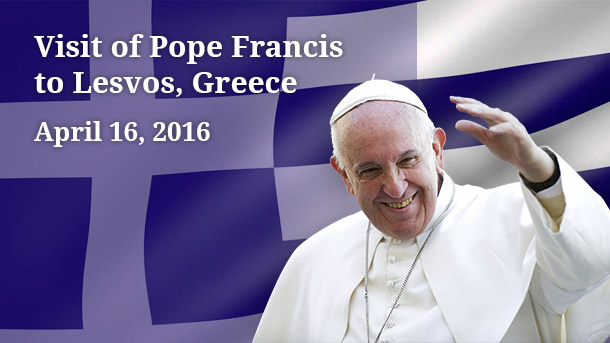 Most papal trips are planned months, sometimes years in advance and involve several visits by vatican delegations to sort out the logistical intricacies. This weekend’s papal visit to the Greek Island of Lesbos was put together in record time and announced just one week before the scheduled departure date. Pope Francis will land on the Greek island of Lesbos Saturday morning. There will be no public speeches at the airport. Instead the pope will travel by minibus, along with the Ecumenical Patriarch Bartholomew and Greek Orthodox Archbishop Ieronymos of Athens, to the Moria refugee camp. The humanitarian group Human Rights Watch says at least 3,000 people are currently living in the Moria camp. Among the asylum seekers are Syrians, Iraqis, Afghanis, and Pakistanis, all looking for a safe place to start their lives over until their home countries are once again safe. Upon their arrival at the camp the pope, the patriarch and the archbishop will greet 250 asylum seekers individually. All together they will spend more than two hours at Moria and have lunch with 8 refugees who are representative of Moria’s current residents. From the refugee camp the pope’s ecumenical delegation will travel to the port city of Mytilene to meet with local residents and remember the migrants who died trying to reach Lesbos. Among the residents who will participate in the ceremony is the Catholic community of Mytilene. You can watch the pope’s visit to the Moria refugee camp and the memorial at the port Mytilene on Salt + Light starting at 12:00 pm ET / 9:00am PT