It's a mysterious and intriguing relic widely believed to be the burial cloth of Jesus Christ. 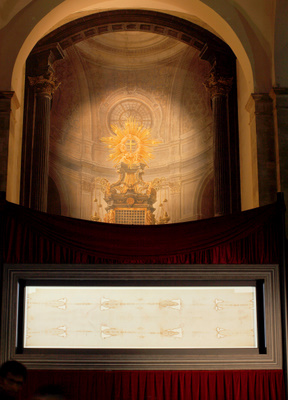 It has fascinated Christians for centuries and created controversy and debate among scientists and scholars alike in their attempts to prove and disprove its authenticity. Fact or fiction, the Holy Shroud of Turin, is a historical and scientific phenomenon. This Sunday, May 2nd,  Pope Benedict XVI will make his first apostolic visit to Turin to celebrate Mass, meet with the youth and venerate the Shroud.  Salt + Light will be bringing you full coverage of this one day event with live commentary from host Alicia Ambrosio in Rome. This is the first public display of the Shroud in ten years and originally it wasn’t slated to be shown again until 2025. This is also the first time the new restoration work to the Shroud will be seen by the public. The Shroud under went restoration in 2002 to remove damages on the cloth that have occurred in its history; some of these damages include parts of the cloth that were burned in a fire in 1532 and patches sewn on by the Poor Clare Sisters. When the exhibit opened, Pope Benedict said during a Regina Caeli address:

I rejoice at this event which is once again attracting a vast number of pilgrims, but also studies, reflections and, especially, an extraordinary reference to the mystery of Christ's suffering. I hope that this act of veneration may help everyone to seek the Face of God, which was the deep aspiration of the Apostles, as it is our own.

Follow Pope Benedict in his encounter with the Holy Shroud, and join us for our live coverage beginning Sunday, May 2nd, at 4:30am ET.  Visit our apostolic journey to Turin page HERE for more programming details. - CNS photo/Paul Haring