Pope sends message to the people of Lac-Mégantic 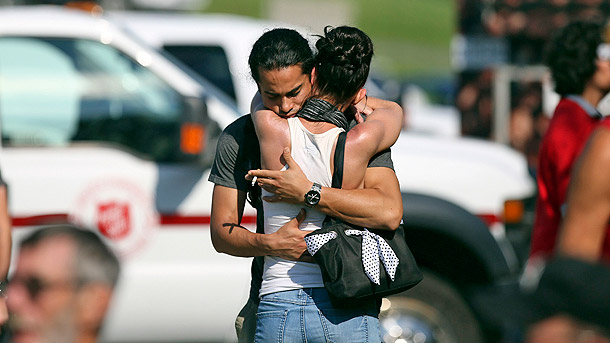 Late yesterday afternoon, the Canadian Conference of Catholic Bishops received the following message from the Apostolic Nunciature. It is a message from the Holy Father to the people of Lac-Mégantic.

Upon learning of the tragic train derailment at Lac-Mégantic, with its many victims of whom a large number is still unaccounted for, His Holiness Pope Francis unites himself through prayer in the anguish of the grieving families, and he entrusts the victims to the mercy of God, asking Him to welcome them into His light. He expresses his deep sympathy to the injured persons and their families, to the emergency workers, and to all the people around them, asking the Lord to support and comfort them in their hardship. As a token of consolation, the Holy Father sends a special apostolic blessing to all persons touched by this tragedy. Tarcisio Cardinal Bertone Secretary of State

(Text courtesy CCCB) - Photo: A man consoles a friend July 8 at the Polyvanlente Montignac, the school sheltering people who were forced to flee their houses after a train explosion in Lac-Megantic, Quebec. Most of the town's central business district and dozens of residences were de stroyed July 6 after a runaway train that was headed to a New Brunswick oil refinery derailed and exploded. (CNS photo/Mathieu Belanger, Reuters)